For quite some time now, people have been asking if I intend on running a Patreon campaign for the YouTube channel - but I have to admit that I was a little hesitant to do so at first.

The main reasons behind this feeling were:

1) All the pdf files are available as pay-what-you-want downloads - so if you wanted to support the channel financially, there was already a way of doing so.

2) I didn't want to seem too greedy by having this stuff be both PWYW and on Patreon.

3) I already have a Patreon campaign for the VTT maps that I create, and I'm pretty sure that having more than one campaign running at the same time is frowned upon.

However, the requests have kept on coming in, and so I have asked my existing patrons if they would have any objections to me rolling the YouTube stuff into the same Patreon campaign as the VTT maps. And, as you can probably tell by the title of this post, I was encouraged to do so!

So, whether you're interested in the VTT tiles for use in your online games, or if you're a fan of the 2.5D tiles for use on the regular tabletop, the Patreon campaign will now include both of these projects (along with any other random 'dungeon stuff' that I come up with along the way ;) ). 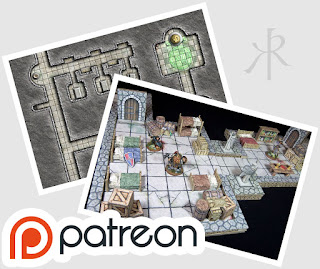 However, just like before, the aim is NOT to hide any of the finished tiles/textures/maps behind a paywall (that has never been my intention for these) - though there are a few benefits/rewards for those that want to join me on Patreon, and it would be great to see more people jump on board.

So yeah, I've put this off for long enough, if you really do want to support me on this journey of mine, then here is an additional way of doing so (though please don't ever feel obliged ...just think of it as a tips jar kind of thing).

Anyway, I hope that's good news for those of you that have been prompting me to do this - I admit that it's taken me a little while to get around to it ...but better late than never :)

Back when I first started the youtube channel, I previewed a couple of sci-fi prototypes that I hoped to get around to after I'd got a nice selection of 'dungeon' themed stuff completed.

However, they kept getting pushed back as I started working on more and more fantasy terrain ...but (as you can tell by the title of this post) I've finally got around to making a starter set!


That being said, I've only completed the basics at the moment - but just like the dungeon tiles, I hope to make all manner of bits and pieces to go along with them. So (as I say in the video) this is just the beginning!

Anyway, you can grab the pdf file HERE ...and if you have a go at making any yourself, I'd love to hear how you get on :)

I've just released another set of 'Print & Paste' textures ...and this time I've had a go at making a player handout for a an upcoming game. 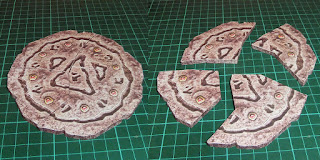 As you can see, the idea is that something like this can be used for those kinds of adventures where the characters are attempting to recover all of the missing parts of an ancient artifact (from various locations) in order to open a magical lock, or to be used to defeat a powerful villain, or similar.

And, as always, I've put together a short video that shows how they are assembled...


...and the pdf file can be found HERE (note that it's a pay-what-you-want product - so feel free to pay as much/little as you like).

Anyway, here's hoping you can put it to use!

I don't think this really qualifies as a map making tutorial ...but I thought it would be of interest nonetheless:


And here's the finished map: 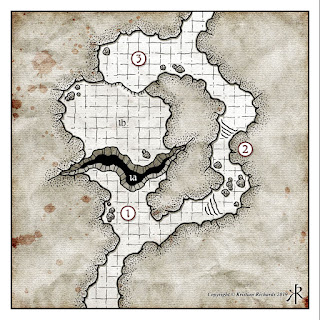