One Mini Every Week #5

There's been a couple of things on my painting desk this week - the first of which is another of the plastic skeletons from Mantic Games... 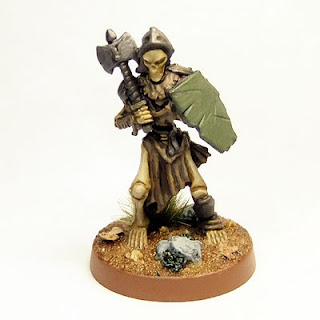 ...and there's not much to say about him that I haven't already before (aside from the fact that you can never have too many skeleton minis :) ).

The second thing I've been throwing some paint at is an old  (long out of production) GamesWorkshop plastic 'empire' miniature (which I've tried to make look like an old statue)... 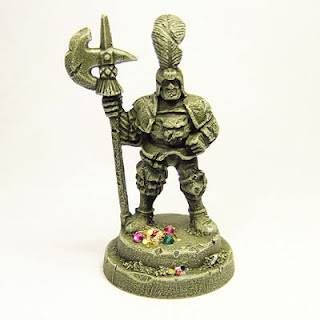 However, I think I've probably painted it a bit too dark - so if I do any more of these (as I have several of these guys lying around) I might try a lighter paint scheme.

Anyway, my aim of painting at least one miniature every week throughout 2016 seems as though it might be achievable... and if you take a look at everything I've managed to get painted in January... 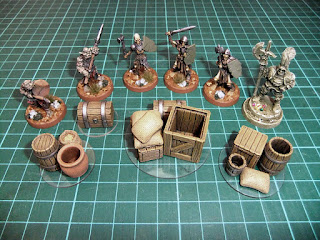 ...you can see I've actually got 5 mini's and 5 pieces of 'scatter terrain' finished :)

One Mini Every Week #4

Since I managed to get 2 mini's painted last time (and thus, I am currently one mini ahead :) ), I hope you'll forgive me if I've strayed a little from the original plan ...as the stuff I've been painting this week might not be what you'd usually think of as 'miniatures.' 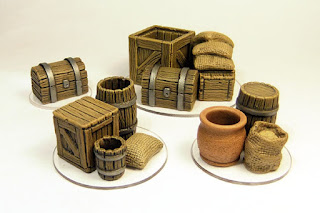 Anyway, these are a few pieces that I have cast (in plaster of paris) from one of my Hirst Arts moulds (it's the #85 mould - about half way down THIS page). I've actually had them sitting around for ages (so nothing new there), and so I thought that now would be a good time to slap some paint on them.

However, once I'd got them painted, I was a little unsure about how to base them - as I wanted to glue several pieces to each 'base' (to function as scatter terrain) ...but I didn't want that base to be tied to a specific environment (i.e. if I flocked the bases they would look a little out of place in a dungeon, or if I based them on dungeon tiles they might look a bit odd in a cave, and so on).

Obviously, this is a very minor problem (indeed, some might say that it's not really a problem at all) - but I thought I'd try to address it nonetheless :) 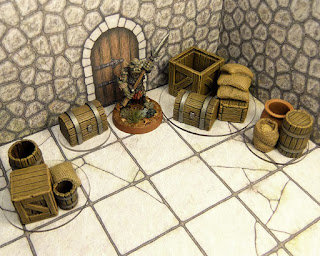 So, in the end I decided to try out some clear plastic bases (I got these particular ones from Hurlbat Games' ebay store) - and  as you can see, basing them this way means that they'll look good no matter what type of map/tile/terrain they are placed upon :)

It's also worth noting that, while Hurlbat Games usually sells their bases in a packet that contains just the one particular size, I simply dropped them a message to ask if I could purchase one packet that contained a mixture of all the different sizes ...and they were more than happy to oblige.

One Mini Every Week #3

My quest to paint at least one miniature every week continues - and this week I've actually managed to splash some colour on a couple of mini's... 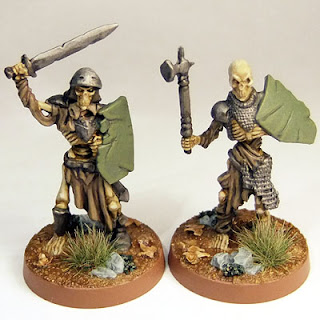 These two are plastic skeletons from Mantic Games (though you can also pick them up as part of the Frostgrave 'undead encounters' set as I did), and as you can see - they're nicely proportioned, and dressed in suitably tattered rags and armour.

They're also very easy to put together - though some of the detail is a little shallower than I would like in places; but apart from that, I think they're probably some of the nicest (plastic) skeleton mini's that I've seen.

And if you're interested in taking part in the 'one miniature every week' challenge (or just want to see what other people are up to), you can check out (and use) the #oneminieveryweek hashtag over on G+ and facebook.

One Mini Every Week #2

As I mentioned in my last post, this year I've set myself the goal of painting one miniature every week ...so here's this week's mini: 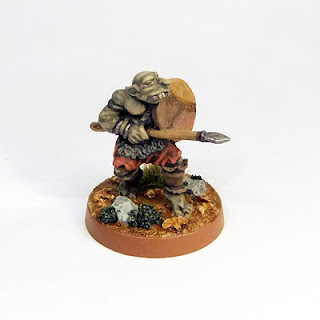 This one is a 'goblin of the free forest' - another single piece metal miniature by Midlam Miniatures.

Much like the last miniature, it comes on a small integral base (though I've put mine on a regular 25mm plastic base), and is a rather nice little mini ...especially since it only costs £2.

And if you're interested in taking part in the 'one miniature every week' challenge (or just want to see what other people are up to), feel free to check out the #oneminieveryweek hashtag over on G+ and facebook.

One Mini Every Week #1

I'm not normally one to make new year's resolutions and all that, but this year I've set myself the goal of painting at least one miniature every week.

You see, I've amassed quite a collection of the little blighters over the years ...and I've probably only painted a fraction of what I actually own - so it's time I did something about that :) 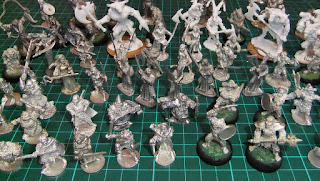 - just a small selection of some of my unpainted minis -

Now, some of these mini's might be OOP by now - but whenever possible I'm also going to try and provide the manufacturer's name, and a link to their website/store (assuming one is still available) ...just in case anyone is interested to learn where I purchased it from.

So, without further ado - here's this week's mini: 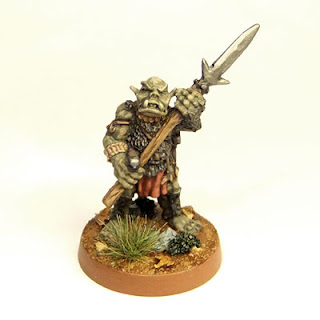 This one is an 'orc of the lost mountains' - a single piece metal miniature by Midlam Miniatures.

The miniature itself comes on a small integral base - but I have set that into a regular 25mm base for a bit of added stability (as I'll be doing with all of these mini's - see the bottom right of the first photograph to get a better idea of what I mean).

On the whole I think it's quite a nice miniature; it took the washes pretty well and is not overburdened with too many bits of unnecessary equipment (which I hate painting) - though it was a little hard to determine if he was wearing chainmail or fur ...but I've gone with chainmail :)

Anyway, I'm sure I'm not the only one out there that has tons of unpainted metal and plastic miniatures lying around ...so if you feel like joining me, please feel free to check out/use the #oneminieveryweek hashtag over on G+ and FB, or post a link to you blog etc., so that I can follow along :)

I recently conducted a little poll over on google plus to see where folks wanted me to concentrate my efforts on this year's project - and the concessus seemed to be that the majority of people wanted me to carry on as before.

So, here we go again with the first dungeon map of another year... 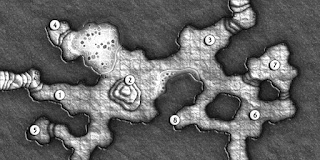 ...and this time we'll be delving the 'deeps' below the mines.

As usual, unlabelled versions of all these maps can be found here...

And you can also click HERE to check out the 'dungeon monthly' Patreon campaign (where folks can donate a dollar so to the project ...and maybe even help me to spend more time creating even more of these little maps).