I thought it was about time to take another quick look at how the encounter booklet is coming along, and (as is usual with me), things are taking more time than expected :)

However, for this little update I thought I'd post a sneak peak at some of the maps that'll be included in the book: 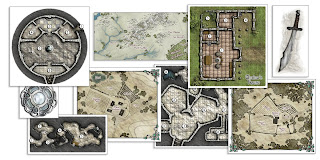 These accompany The Enchanted Forest (which is more of an encounter table than an actual adventure in and of itself), The Shadowstone, Aleglin & Elmina, and the Forgotten Halls* adventures/encounters.

I've also spent most of the bank holiday weekend redrawing the 'keep' maps from the Mathgar Ruins location - as I'm thinking of including a slightly updated version of this as a little added bonus at the end of the book: 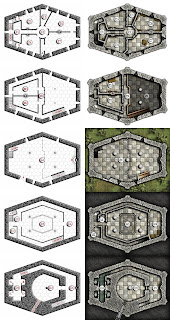 (original maps are shown on the left)

In addition, when the booklet is released, the plan is to include VTT versions of all the tactical maps (at 50 pixels per grid square), and also blow them up to '1 square = 1 inch' so that they can be used as impromptu battle-maps (for use with regular miniatures). These will be included as part of the product at no additional cost - so that folks have everything they need to get things started.

And that's about it for now :) 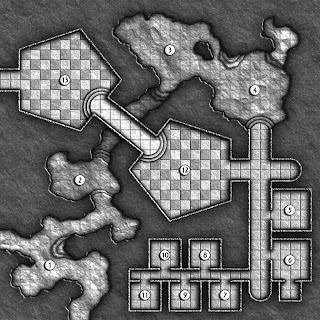 Note that unnumbered versions of all of the 'dungeon monthly' maps can be found in the following G+ albums: