As you may know, my latest project is to make a bunch of different hex-tiles that can be pieced together to make little 3D village maps (as seen in the prototype image below). 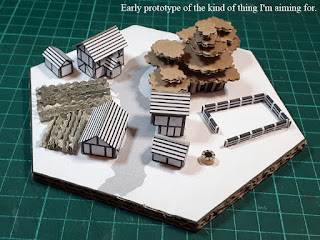 Well, in the previous video I got started on the little houses, and in this latest video I've moved on to little clusters of trees (copse-like clusters if you will):

And as always, you can find the pay-what-you-want pdf file over on DriveThruRPG.

As some of you may know, the YouTube channel has continued to grow and I've recently hit 10,000 subscribers! (which, as far as I'm concerned, means that it's been a big success). As such, I have a few announcements that I'd like to make ...all of which are covered in the following video:

However, if you don't have time for all that nonsense, or would like a bit more information, then here's the breakdown ;)

As I say in the video, I haven't gone overboard with this (as I doubt there'll be much call for socks or shower curtains with the channel's logo on them) ...but  a mug and a sticker is the kind of thing I'd put to use myself. 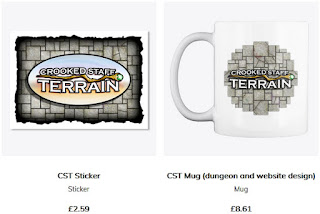 I mean, I don't really drink 'hot drinks' - so my own mug will likely get used to hold gluesticks and paintbrushes ...but the sticker will find a good home on the back of my laptop :)

Anyway, HERE is the link to the (tee)spring storefront. If there is anything else you'd like me to consider, just drop me a message.

I've decided that, every now and again (essentially when I have enough material), I'll tidy up some of my own DMing material (or personal / 'for fun' projects), and present it in a 'zine format. 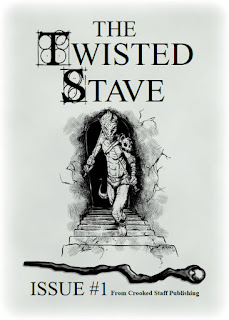 They'll probably not be all that frequent - but this first one is available for free (subsequent ones will be free to Patreon supporters, and $1 for everyone else) - so please do feel free to check it out and see if that kind of thing will be of interest to you. HERE is the link.

Note that I'm presenting it as 5E compatible - but there'll generally be a couple of articles that aren't really tied to any system (though, for the most part, it does assume a fairly traditional fantasy-medieval setting).

THERE'S GOBLINS IN THEM THERE HILLS

I've mentioned this adventure a couple of times before (as I planned on doing a series of videos showing which pieces of terrain you'll need to build for each encounter area, and so on) - but I figured this would be a good time to release that too. 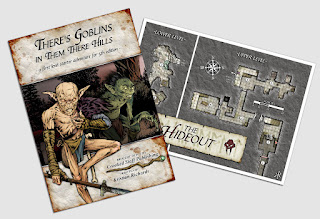 Now, I do still hope to get around to those videos at some point (as the adventure has been written with the 'print & paste' terrain in mind) - but if you're familiar with most of that stuff, then you should have a good idea of how to go about it.

Anyway, the adventure itself isn't meant to be particularly revolutionary (or all that original) - it's just a fun little dungeon romp that you can get through in a session or two.

For this particular giveaway you will need to go to the video's page over on YouTube (as I am only counting entries over there - just so that I don't have to monitor several different pages for the next month ;) ).

And, as I explain in the video, everyone that picks up one of my pdfs will already have a DriveThruRPG account... so the giveaway should, in theory, be available to everyone (and no-one even has to leave the house to post/receive it - because, you have to admit, we are living in strange times).

So if you do enter - here's wishing you good luck!

I said this at the start of the above video, but I want to say it again here (at the end of this post).

A huge thanks goes out to everyone that supported me over the past few years - I really do appreciate it ...and here's looking forward to the next milestone*