1st video review of the Age of Shadow

I've noticed that The Age of Shadow RPG has been downloaded quite a few times today - which has led me to believe that someone, somewhere, has probably mentioned it on a blog or something similar (as is usually the case).

However (much to my surprise) I've since discovered that it has received its first video review over on YouTube (by Kurt Wiegel of GameGeeks):

Also, this seems like the perfect time to say that, if you're thinking of picking up either the Campaign Guide, the encounter booklet, or the map of the North Kingdom, then you might want to hold off until this coming Monday, as I'll be putting a bundle together for a special one day* 'Cyber Monday' deal.

Here's this month's dungeon map, and the penultimate one of the year: 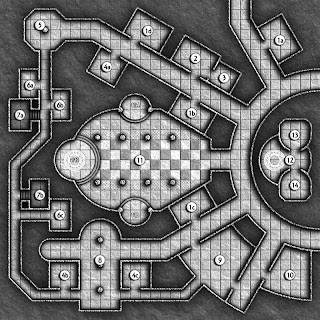 And, as always, unnumbered versions of all of these maps can be found in the following G+ albums (making them ideal for use with virtual tabletops and the like):