This one's taken a while to get finished, as I've been pretty ill this month (and ended up having to stay in hospital for a while) - so I'm a bit behind with everything.

But enough of that nonsense - at the start of August I started making a few prototypes for some kind of stasis chamber or hypersleep/cryo pod (i.e. the kind of thing where astronauts are put into suspended animation for a long journey through space)... 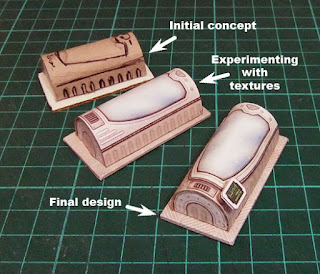 -from prototype to final design-

...and I've recently released the finished pdf HERE, and uploaded the instructions video to YouTube (see below).


And, just like all of the other products in the Print & Paste range, it's a 'pay-what-you-want' download over on DriveThruRPG - so pick it up for free* or pay as much/little as you like!


*though any donations, no matter how small, really do help :)

Making a Cursed Dagger Prop from a Cheap Toy

During Halloween, a lot of the cheap/bargain type shops stock things that can be of use in our games (giant spider models being a favorite of mine) - but last year I picked up this plastic dagger for 1 or 2 pounds (I can't remember exactly how much, or where I got it from - it might have been from Wilko's). 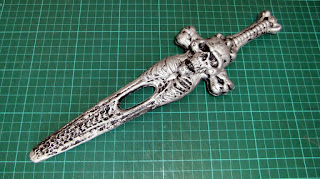 Anyway, straight off the shelf it doesn't look very good at all, but I thought I could probably use this as a prop for a cursed/evil magical item at some point - and so I recently had a go at making it look a little less crappy :) 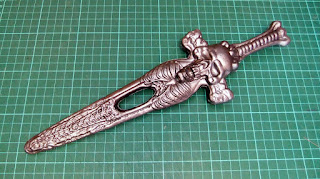 So, in the above picture, all I've done is sprayed it black (after priming it grey), and then while the black paint was still wet, I also dusted it with some silver (all three spray cans were from poundland - and I've always got a bunch of them lying around :) ). 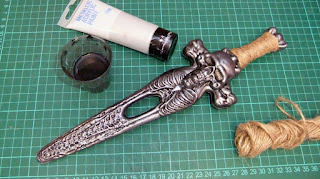 Next, I applied a home made wash (made with equal parts black & brown craft paint, a lot of water, and a squirt of dishwasher 'rinse aid'), and once that had dried, I gave it a heavy drybrush with some cheap metallic paint from poundland (and to be honest that's all it's good for). And, as you can see, I also wrapped some garden twine around the handle (smearing it with PVA glue to make sure it stays in place). 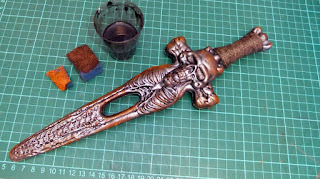 Then I applied some of the same wash to the twine (to darken it up a little), and added some rust by first dabbing on some brown paint with a bit of torn up sponge, and then doing the same thing with some orange paint.

And that's pretty much all there is to it!

It still doesn't look great ...but it's a lot better than what it was :)