A slight departure from the norm for this week's project, as I've been making/painting some 10mm stuff for my 'travel GM's kit' :) 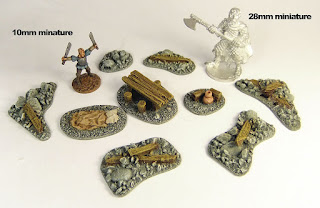 Most of the terrain was made from matchsticks, BBQ skewers, and grit/gravel/sand - though I've also used a couple of tiny beads to make the vase, and the bedding was just a bit of kitchen towel soaked in PVA glue. 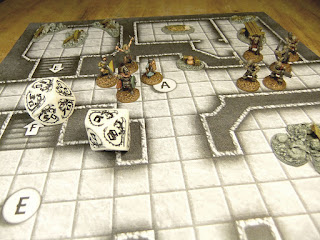 (miniatures are from pendraken and kallistra)

And I hope to use these pieces to add a bit of colour/flavour to a few of my geomorphs (that I've printed out at a suitable scale) which I'm planning on using for a few random(ish) encounter locations in a upcoming game.

Email ThisBlogThis!Share to TwitterShare to FacebookShare to Pinterest
Labels: 10mm

Every now and again I get asked about what's coming up next for the Age of Shadow ...or if I'm still supporting the game.

Well, as regular readers of the blog may have noticed, a lot of what I do is often AoS related (in one way or another) ...be it the miniatures that I happen to be painting - to the maps* and tiles I'm constantly drawing.

(*even the 'dungeon monthly' map compilations are titled 'The Lost Halls of Dam-Teregal' ...an area that just so happened to get a very brief mention in last year's 'zine).

So, since I'm obviously not doing a very good job of touting my wares, I thought I would take this opportunity to compile a list of all the Age of Shadow related products to date.

The core rules are all that's really needed to play the game (as it features everything from character generation rules to monster stats) and is available for free.

In addition to the core rules you can also pick up the Campaign Guide - which provides a basic overview of the default campaign setting, and also includes a variety of additional/optional rules.

Plus there's also a free colour version of the character sheet (should you desire one).

Encounters in the Northlands

This booklet contains a few short adventures and encounters (as well as a couple of new hazards and monsters for your players to overcome).

These little booklets (#1 and #2) are currently coming out at a rate of one per year, and contain an eclectic mix of articles (from new items and monsters, to encounter seeds and random tables) ...which are often taken from my own game notes.

This map depicts the Northern Kingdom (from the default setting) in a little more detail.

Both of these maps (No. 1 and 2) focus in on one area within the Northern Kingdom.

Each of these maps provide you with a brief background of the structure in question, along with a number of maps that detail the overall layout.

While these maps are suitable for use with most fantasy RPGs, they have been designed so that they are typical of Elvish buildings within the AoS setting.

Like the 'City' maps above, these maps are suitable for use with most fantasy RPGs - though they have also been designed so that they are fairly typical of Human dwellings within the AoS setting.

It's probably also worth mentioning that both the Into the Darkness range, and the PWYW Dungeon Tiles also contain some AoS iconography (the emblems upon the tombs, and some of the floor patterns for example) - which also ties them into the setting nicely. Furthermore, if you're interested in getting some of these booklets in print, you might also like to check out what's available from the lulu store.

Once again, the first $25 milestone over on my Patreon page has been met for another month ...so that means it's time to add another mine geomorph to the collection: 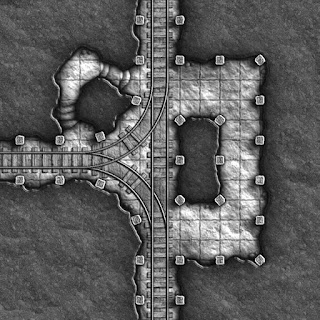 As always, my thanks go out to all the folks supporting me over on Patreon - who are helping to keep this little (five year long) project of mine alive :)

As I mentioned in last week's post, I've decided to take a break from the orc miniatures that I've been painting recently, and have instead been working on something that I can use to mark areas of 'tangleroot' (from the Encounters in the Northlands booklet). 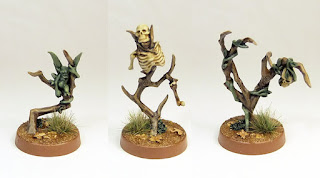 To make these I've simply took some of the spare branches from a GW Dryad sprue, and glued them to small (20mm) round bases.

And I have to say that I'm pretty pleased with the way they turned out!

As I mentioned at the beginning of the month, I have one extremely generous patron (over on Patreon) who's pledged at the 'dungeon designer' level - but instead of requesting a specific geomorph, they have instead asked that I simply 'freestyle' a couple of maps however I see fit.

So, for this next map I've had a go at another 'lets build a dungeon' project over on G+ (basically, it was a fun little project where folks offered up basic room descriptions, one or two at a time - which I then attempted to add to the map).

And here's the resulting map... 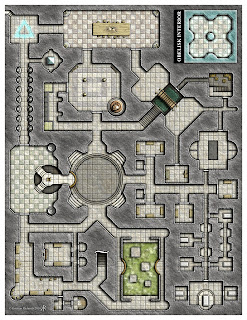 (note, if blogger makes this image too small, you can get a full size version, scaled at 50 pixels per grid square HERE)

Furthermore, if you'd like to see how the map progressed over on G+, you can check out THIS 'collection' - or if you would just like to grab a pdf copy of the dungeon (complete with all the descriptions that people submitted), you can download it HERE.

Despite being a little busy last week (what with the release of the 'zine and my 'lets build a dungeon' project over on G+), I did manage to get another miniature painted ...though I've only just got round to photographing it... 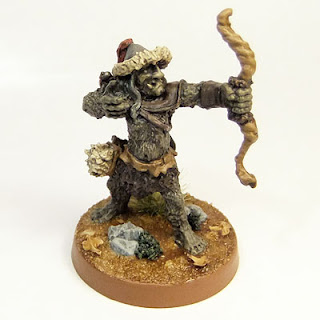 As you can see, this one is the second miniature from the pack of two 'orc archers' (that are available from Ral Partha Europe), and just like the last one, I've gone with another simple (and dark) paint scheme.

And here's a quick look at all of these particular style of orcs all together... 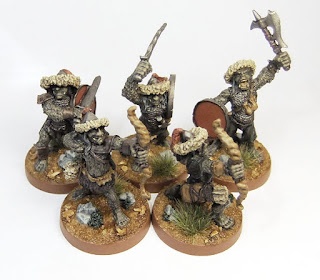 - these will be used as 'darklings' (i.e. the half-breed spies from the encounter booklet) in my current AoS campaign -

...and though I still have about half a dozen more of these guys to paint - I might take a break from them for a little while, and splash some paint on something different this coming week :)

I'm very pleased to announce the release of the next little 'zine for the Age of Shadow RPG... 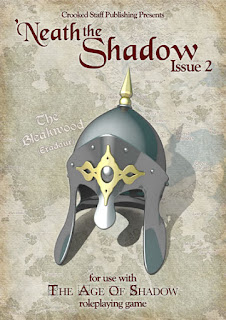 Included in this (A5 booklet size) issue are:

And while some mechanics/statistics are geared towards the Age of Shadow RPG, most of these articles should be compatible with other percentile based games with little or no modification.

'Neath the Shadow #2 is available (in pdf form) from RPGNow and DriveThruRPG.

Furthermore 'Neath the Shadow #2 is also available in print via LULU. 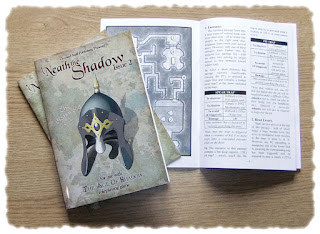 Email ThisBlogThis!Share to TwitterShare to FacebookShare to Pinterest
Labels: Age of Shadow, zine

Over on my Patreon page I have a $25 pledge option that enables folks to submit a geomorph sketch of their own - that I will then attempt to draw in my usual style.

Now to be honest, I didn't really expect there to be much interest in that option, so imagine my surprise when one extremely generous patron not only jumps in at this level - but also requests that I simply 'freestyle' a map however I see fit!

So, rather than creating another modular/geomorph-style map, I thought I would spend a little more time on this one - the result of which I've posted below: 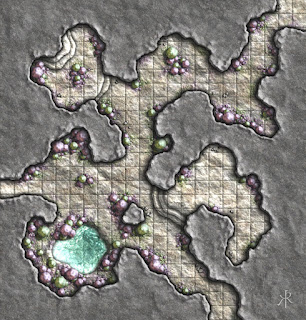 As you can see, I've gone with a similar theme to the last geomorph (i.e. a mushroom filled cave), but this time I've drawn it as a (full colour) stand alone map that can be used for an little encounter or two :)

I had hoped to get more than one mini painted this week ...but alas, all I had time for was a single archer: 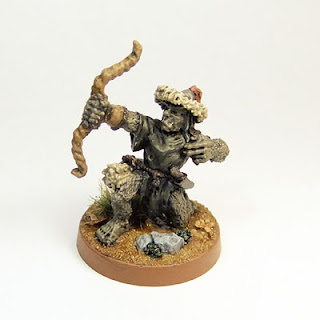 Like the last bunch, this mini is available from Ral Partha Europe, and comes in a pack of two 'orc archers' (the second of which I plan to get painted this coming week).

As I said before, I really like the look of these miniatures (not to mention the fact that they're also pretty cheap), and once I get the rest painted (I think I have about a dozen of these orcs in various poses), I'll have a nice little warband to terrorize my players with ;)

It's time for another dungeon map ...and for this month's geomorph I thought I would include a few clusters of giant mushrooms (as no RPG cavern system would be complete without them :) ). 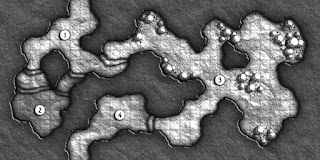 As usual, unlabelled versions of all these maps can be found in these albums...


Furthermore, if you'd like to see me create even more of these geomorphs, feel free to check out my 'dungeon monthly' Patreon campaign (which has nearly met it's second milestone!)

And for those of you that may be interested, here's a quick look at one way of piecing all of this year's maps* together... 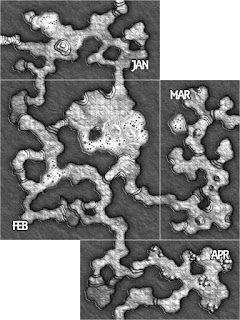