So, in my last blog article I posted some thoughts on 'mine tiles' and how I thought that steel rails were a bit inappropriate. And while that doesn't seem to bother most folks, I do like my own 'fantasy' to be somewhat grounded in reality ...with more of a dark-age to medieval vibe (though I do also enjoy a totally gonzo high-fantasy game from time to time ;) ).

Anyway, as you've probably guessed (and as you can see in the picture below), due to my own leanings, I've gone with a 'compromise design' - where the rails still have a bit of a modern look to them (so as to be instantly recognisable), but they are made entirely of wood. 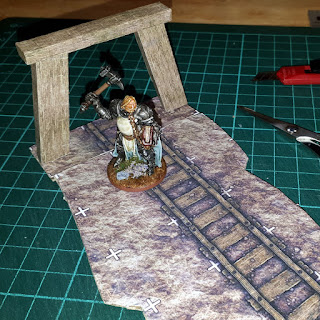 - some of the first prototypes with a 'bones' miniature for scale -

So, now that that's out of the way, here's the first video in the 'mines' series - and in this one I've started work on a basic tile set, along with a working turntable (again - I've gone with the latter, rather than a complicated 'points' system).


And, as is usual with my print & paste range, the associated pdf file is a pay-what-you-want download over on DriveThruRPG.

Now, as I mentioned in the video, the accessories should follow along either later this month or early next (essentially whenever I manage to get the video filmed and edited ;) ) - and that will feature things like the little cart that you can see below. 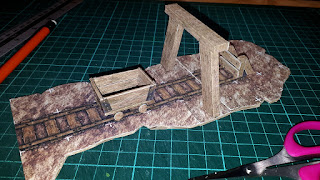 Anyway, one of the things I forgot to mention in the video is that there is both a gridded and a gridless version of the textures included in the pdf - so here's hoping that they'll prove to be useful for whatever game you're playing :) 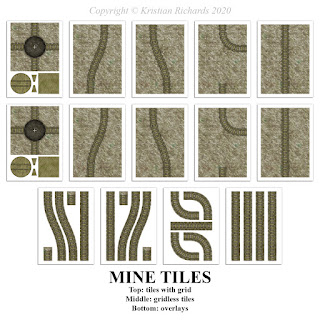