Hello again! I just thought I'd make a quick blog post to, as the title suggests, update you on a few things. So, here goes... 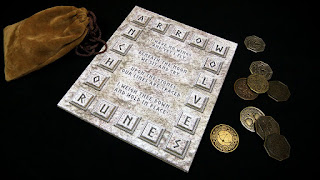 After the release of the puzzle handout (pictured above), a few folks asked if it would be possible to make it so that they could input their own riddles and letter combinations ...and so I've come up with this:

As you'll see, it's just an additional pdf file that has several text fields that you can edit. So, all you need to do is fill it in (or use the sample riddles provided), print it out, and stick the whole thing on top of the original puzzle (it'll make more sense if you watch the video).

Now, the text is just that (plain text) - so it's not going to look as nice as the engraved script of the original file - but I think it should do the job well enough.

Note that I've uploaded this new file to Google Drive (and that it works best in something like adobe acrobat reader).

Anyway, during the course of the last month or so, I asked if any of my Patreon supporters would be interested in joining me on Roll20 - so that I could have a go at running the little 'goblins' starter adventure that I've written (as a playtest kind of thing). 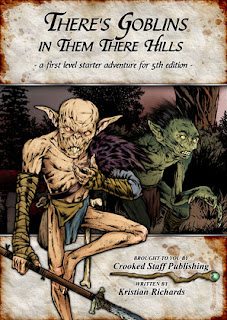 (I actually mention this briefly in a recent podcast). 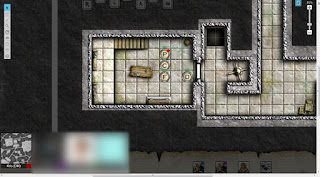 Anyway, these guys have made me realise that I should start running/playing online again (especially since I'm not managing to roll any dice IRL at the moment), and so I've decided to do just that ...and see how it goes.

So, once again, I've given Patreon supporters the first refusal to get involved with this ...and the plan is to start things off with Greg Gillespie's Barrowmaze! (the 5E version). 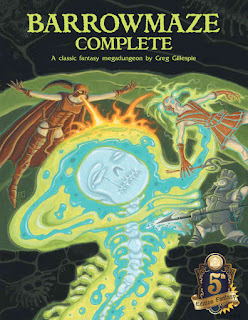 Now, I don't usually run published adventures all that much (so this might go badly ;) ), but I'm drawn to the idea of a drop-in/drop-out style of game (i.e. each session being it's own self-contained thing) ...and I think the mega-dungeon is an ideal setting for this kind of play.

So, the current plan is to run the game a couple of times a month, and whatever 3 to 5 players sign up for a particular session - those specific characters will form the adventuring party that heads out into the moors on that particular day.

I'm not sure how well it will work ...I guess only time will tell :)

Note that I'm posting the sign-up sheets in the 'patrons' section of my Discord server (as we'll be using discord for voice chat anyway), and the games will likely take place on a Saturday or Sunday evening (so 6pm 'till 9pm UK time).

Another thing I'm working on at the moment is a texture to represent the (inner/outer) walls of cottages, taverns, inns, and that kind of thing.

And while you'll still be able to take a simple texture like this one...

...and do something similar to the dungeon room you can see below (i.e. just add a the odd wall here and there to help give the sense of a building rather than a stone dungeon)... 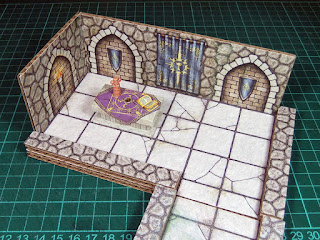 ...the plan is to also make it so that it's possible to put them together in a more modular fashion - so that we can swap out different wall pieces, and replace them with others ...like you can see in this short video clip:

Anyway, that's what I'm working on at the moment (plus a few other things that I'll not go into, as this post is already long enough) - so thanks for getting to the end of this article, and here's hoping that some of this nonsense was of interest to you :)

Make your own 'puzzle' player handout.

I've taken a bit of a break from dungeon terrain with my latest video ...and instead I've had a go at making a puzzle piece that your players can get their grubby hands on :) 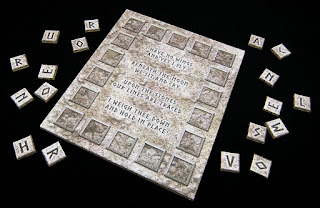 Now, the puzzle itself isn't much more that a crossword puzzle (albeit one where the players already have all the letters they'll need), and it's a simple matter of inserting the letters into the correct slots to spell out the answers to the four riddles.

So the answer to 'I have no wings, and yet I fly." goes along the top (and is 5 letters long) for example.

From there the answer to each riddle goes around in a clockwise direction (so riddle two's answer goes on the right, riddle threes' answer goes along the bottom), and once all of the letters have been correctly placed, the door unlocks (or the chest opens, the trap is disarmed, or whatever).

As usual, I've made a short video showing how easy it is to put together...

...and the pdf file can be found on DriveThruRPG (it's pay-what-you-want so feel free to pay as much or as little as you like).

Anyway, I hope you like it ...and I hope you'll be able to find a use for it in your games!