Well, it's time for another of my terrain videos ...and this time I've been making some archways for the dungeon: 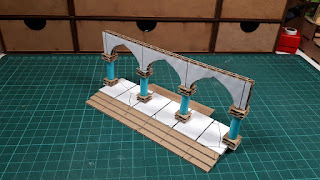 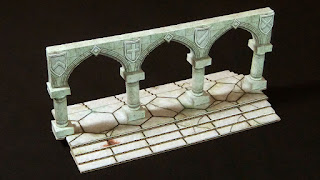 Anyway, there's a (pay-what-you-want) pdf file that contains all of the new textures HERE, and posted below is the video where I show how I put everything together. 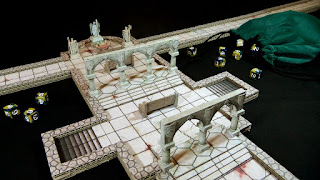 - SOME OF THE NEW PIECES IN ACTION-

As usual, I've been posting my progress with these over on the various social media pages (so there's no real surprises here) - but here's my latest release ...TENTACLES!

The video above shows you how to put them together, and for my own game I'm thinking of using them as some kind of trap/hazard rather than an actual monster (like the 'black tentacles' or 'entangle' spells for example).

Anyway, as I say in the video, this is probably as close as I'm going to get to a Halloween episode (not that I normally do themed episodes) - but it's purely by coincidence :)

Note that the pay-what-you-want pdf file can be found HERE.

I really need to stop doing this ...but every time I get a little box in the post (one that's still in pretty good condition despite the best efforts of the postal service) I get the urge to turn it into a little self contained (mini) dungeon :) 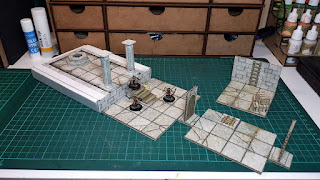 -the layout of this little dungeon-
Now I haven't written anything up for this one yet, but the idea was for it to be some kind of holy site (let's call it 'The Well of St. Orandi' or some such) - where folks make a pilgrimage to deposit their prayers/confessions/etc. (in written form) into the well ...along with a few coins for good measure (very much a 'wishing well' kind of thing).
However, a few goblins have got wind of this last part ...and they have started lowering themselves down into the well to retrieve this 'free loot' ;)
Obviously, this has folks up in arms (and worried that either their prayers might not be answered ...or their confessions be discovered) ...and so the PC's help is sought.
So, it's nothing more that a simple level 1 encounter really - but I like having things like this ready to go (should I need something for an impromptu one-shot) ...plus I enjoy the idea of trying to create the terrain for an adventure/encounter - but limiting myself to what I can fit inside a small box (and indeed, let the resulting terrain be the inspiration for that encounter).
-unpacking the adventure-
Furthermore, I picked up a pack of the D&D/Wizkids goblins a while back, and because they are a bit tiny (and because they don't really match any of the other goblins I have), I thought I could slap a quick paint job on them, and throw them in the box too. 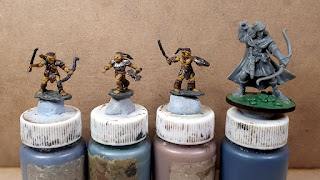 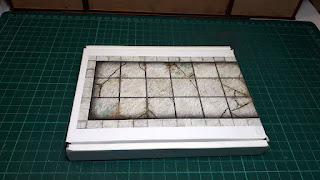 -the exterior of the box- 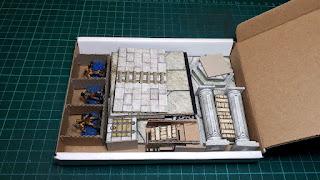 -everything packed away neatly inside-