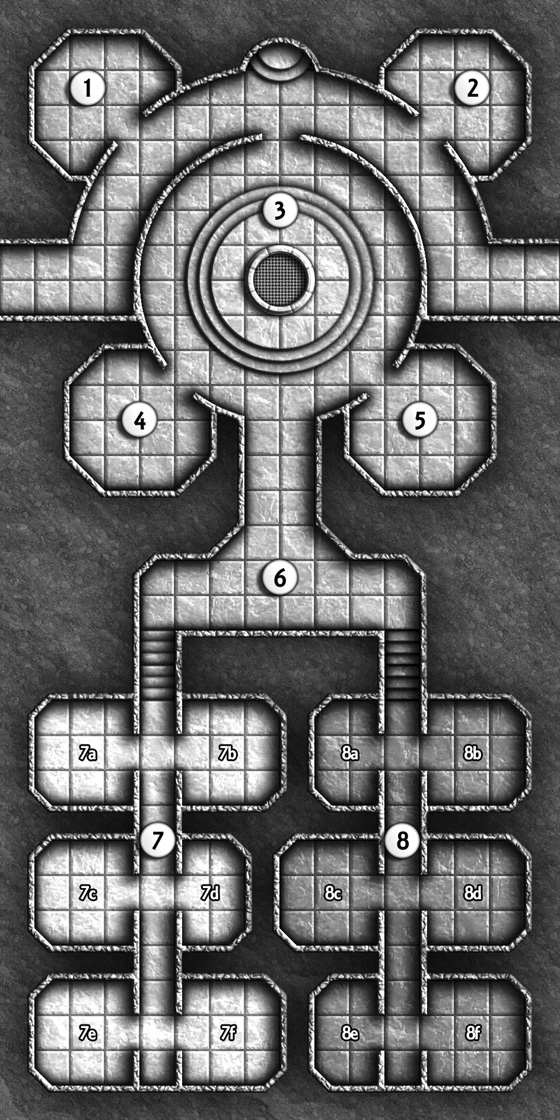 And if you're looking to use these maps with some form of virtual table-top, then you can find all of these 'dungeon-monthly' maps in the following albums:

Over the past month I've noticed a few pictures scattered around various parts of the Internet that show how folks have made cheap wargaming/RPG hedges out of nothing more than dish scourers/scrubbers (i.e. the abrasive green things you use when washing the dishes) and tongue depressors (i.e. the things that look like large lollipop/popsicle sticks).

Apparently, folks have been doing this for years - but since I've only recently discovered the technique, I thought I would give it a go myself (adding a few extra steps of my own along the way). 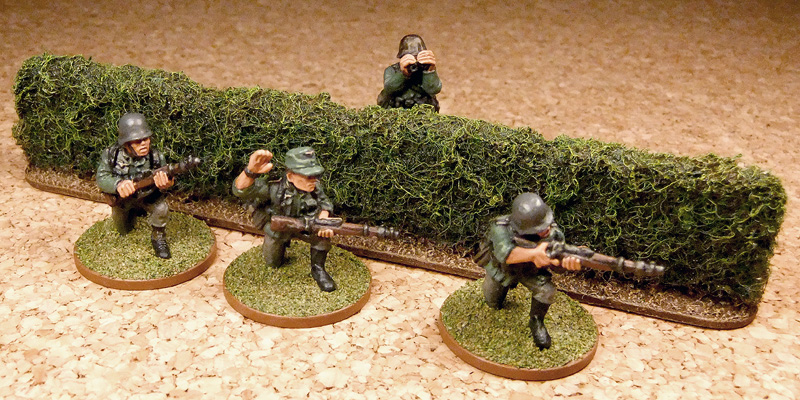 (some WW2 figures next to one of my finished hedges)


So, if you're looking to do something similar yourself, this is what you'll need: 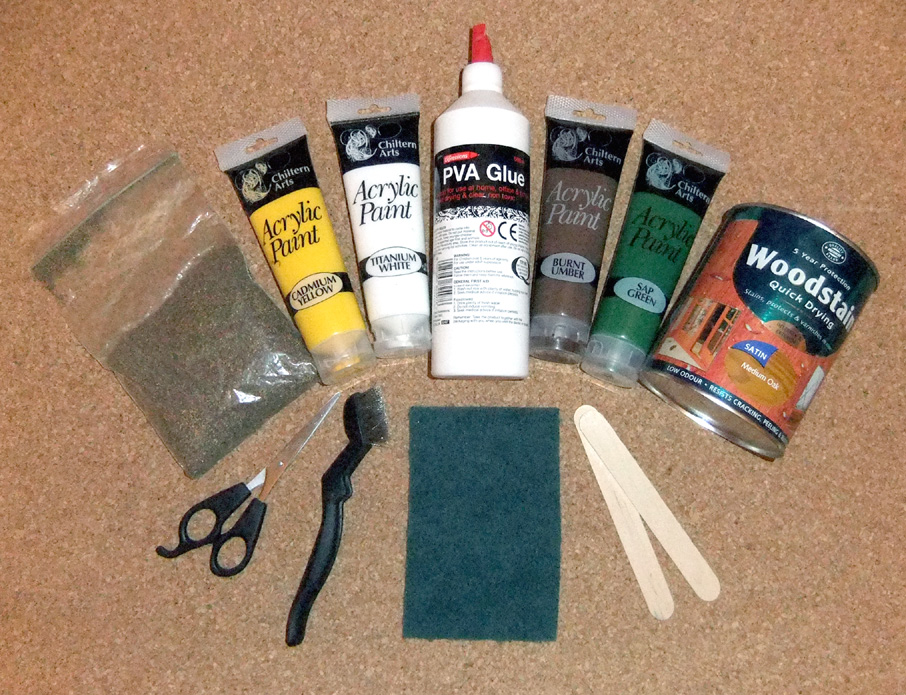 
Bottom Row (from left to right):

The very first thing you'll need to do is cut the scourer in half lengthways (as each scourer is large enough to make two of these hedges) - which will leave you with two pieces, roughly 6"x2" in size.

Then take one of these 6"x2" pieces and fold it in half (lengthways).

Once you're happy with the fold, apply a generous amount of glue to the inside of the folded area, and glue the two sides together (to form a 6"x1" strip as shown in the picture below). 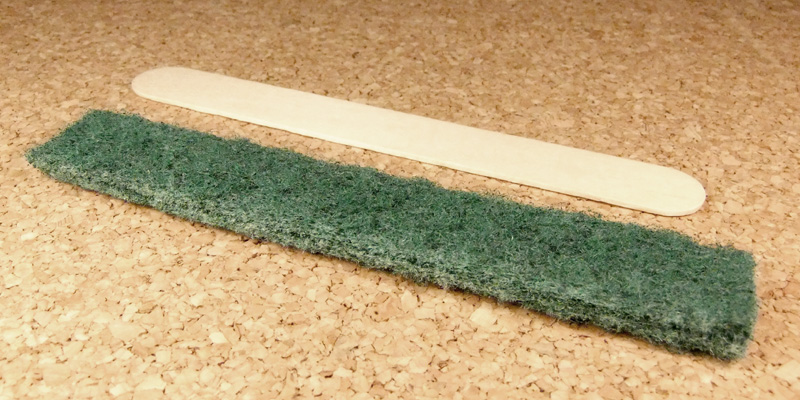 Then place a few heavy books (or something similar) on top of the strip, and leave it to dry overnight.

Once this is done, simply glue the scourer to one of your tongue depressors and add a little flock around the edges (as seen below). 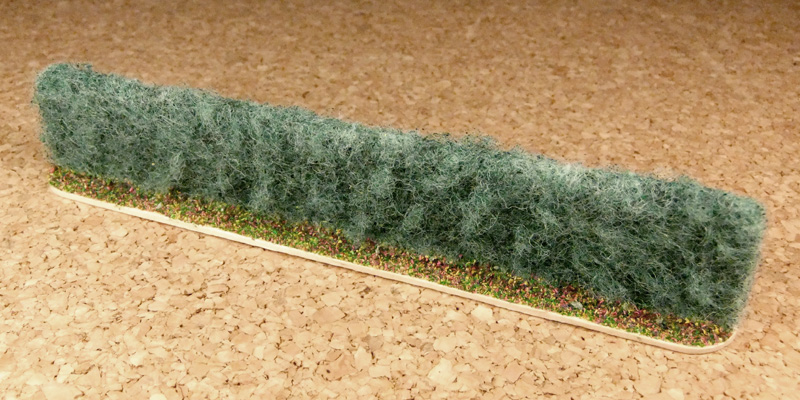 At this stage you might see some undesirable wisps or clumps of the scourer sticking out in a few places - but don't worry about that for now (as this will be taken care of in the next step).

Once you're satisfied that the glue is dry, give the flock and base a quick coat of brown paint, and cover the scourer with a generous amount of woodstain.

This serves two purposes; firstly it darkens the whole piece (and tones down the slight bluish hue of the material), and secondly it hardens the hedge - making it feel a lot more solid when it dries. 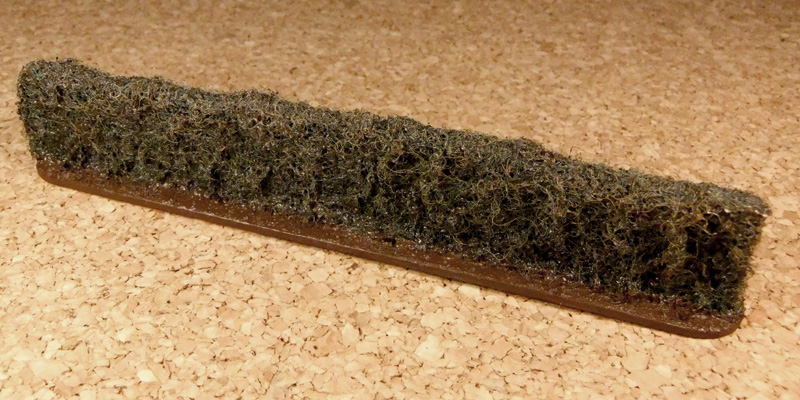 It's also worth noting that if you still have a  few wispy bits of material sticking out of the hedge at this point, you can wait for the woodstain to become 'tacky' and then push/squeeze them back into a more desirable position.

Once the woodstain is dry, all that's left to do is add a bit of colour to the piece using some cheap acrylic paint. 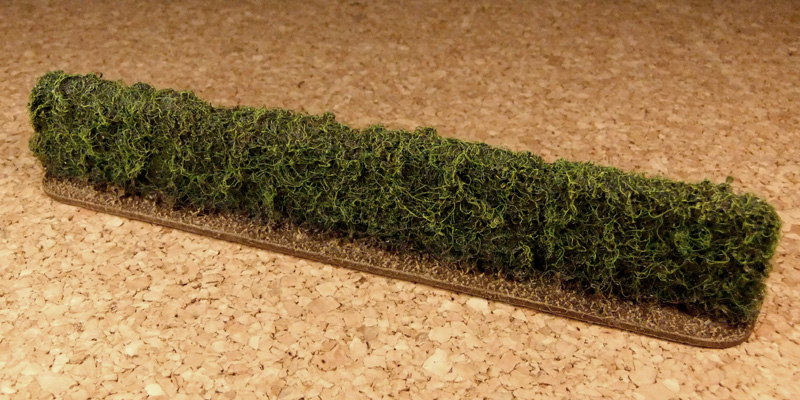 For the greenery I first applied a heavy drybrush of green, followed by a regular drybrush of equal parts green & yellow mixed together, and then a final (light) drybrush of yellow.

If you're anything like me, the chances are that you've already got most of what's needed lying around the place (assuming you at least dabble in painting miniatures) ...and in my part of the world, a pack of 10 scourers goes for £1 at the local 'Poundland' store, and I managed to get a pack of 25 tongue depressors off ebay for a similar amount.

So, as you can see, the hedges themselves cost very little to make (around 10p each in my case) - so if you're looking to add a few pieces of terrain to your tabletop, but don't want to break the bank in the process, then why not have a go a creating a few of your own :)