I've managed to get two 'print & paste' videos filmed and uploaded this month (along with their associated pdf files), and this latest one features a few alcoves/niches that can be used to add some interest to passages and small rooms - without them taking up any of the playable space!


And, as usual, you can pick up the pdf file from DriveThruRPG (it's a pay-what-you-want product - so pick it up for free, or pay as much/little as you like).

I've also just released the second 'crafting encounters' booklet over on the DMsGuild. 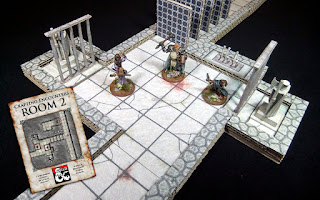 And, just like the last one, this booklet features a single (5E) encounter, and contains tips on what terrain you'll need to build for that encounter (assuming you like to use terrain in your games), along with a VTT map (for those that play online), and a simple 2D battlmap (for those that still like to use miniatures - but don't want the hassle of building terrain).

Furthermore, I've also written a short article (and created a few custom textures) for issue 2 of Bexim's Bazaar ...a new online magazine from The Tabletop Engineer (AKA Jim). 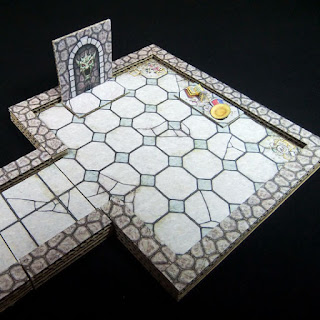 And, as you can see, the textures that I've provided for the magazine should allow you to build a medium sized room with a few bits of treasure scattered about the floor, and a gargoyle-like face* (quite possibly a trap ;) ) on one of the walls.

*note that this is a slight variant of the one found in the 'Alcoves & Niches' video ...as this one has red gemstones in place of its eyes.

So, feel free to check any (or all) of these out ...and, as always, let me know what you think!

As some of you will know, for the first half of this year (possibly longer) I'm going to be drawing a bunch of cave tiles that you can piece together to create your own cavern layouts.

However, it'll probably be a few months before there's enough variety to make anything other than simplistic layouts ...but I thought I'd post a picture of the kind of thing you can do with just these eight tiles (to give you a better idea of the kind of thing I'm aiming for). 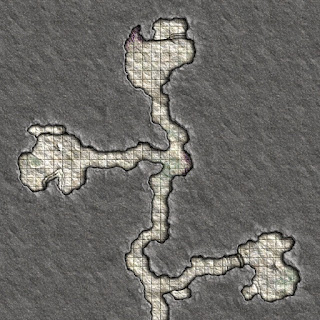 And, all this is being made possible by the kind folks supporting me over on Patreon (thanks guys) ...and it's my hope to eventually add 'feature caverns' to the library (so caves/tunnels with lava or water running through them, giant mushroom groves, goblinoid lairs, and so on) once I've got a working 'core set' complete.

Note that you can find links to all of these maps over on the Patreon page ...though I am also compiling all of the cave tiles in THIS FOLDER over on google drive.

I'm back again with another new set of textures ...and this time I've been making some metal pipes, rusty cages, levers, and so on.

And if you're interested in making a few of your own, the pdf file is available over on DriveThruRPG as a pay-what-you-want product ...so feel free to pick it up for free, or throw a couple of coins my way if you really feel the need :) 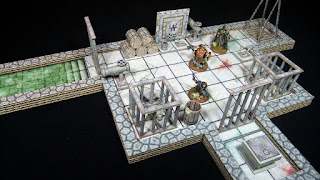 As most of you will probably know, I've had an ongoing Patreon campaign for a few years now (one that's tied to my smaller/VTT maps), and so I thought I'd take a few minutes to show off all of the tiles I created last year - thanks to the support of my kind patrons. 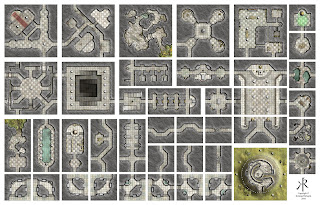 As you can see, most of them are modular dungeon tiles that allow you to make maps like this: 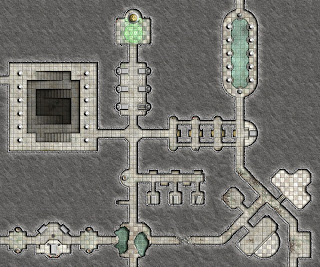 ...though, I also added in a few stand alone pieces (like the cave and the barrow) for a bit of added variety every now and again.

Anyway, now it's the start of the new year, I've decided that I'm also going to start work on an accompanying set of cave tiles (for even more variety) ...though obviously, it's probably going to take a few months before we get enough tiles to make a reasonable looking layout ...but you've got to start somewhere, right? 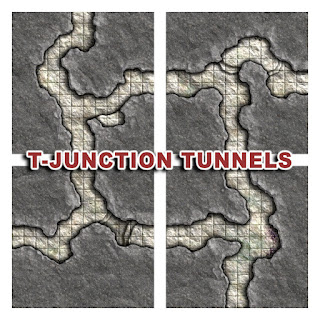 Note that you can find all of the maps from 2017 onwards in THIS album or over on the PATREON page.