I've been a fan of 10mm miniatures for a while now (though mostly fantasy up until this point) ...but there doesn't seem to be much love for this scale when it comes to printable terrain (especially on the sci-fi front).

So in an attempt to remedy that, here's a quick look at something I've been working on this past month (though it's something I've been meaning to get around to for a while now) - mainly for my own gratification, though I'm also hoping to have it available for purchase (as a low cost pdf booklet) through the usual storefronts by the end of the month: 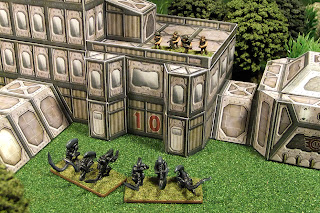 As I say, it's scaled for 10mm miniatures (those shown are from Pendraken Miniatures), and since it's a pretty small scale to be working with, I've kept everything relatively simple to put together, and made all the little pieces as modular as possible (so as to allow for a fair amount of customisation). In addition, I've found that if you use the 'page scaling' option of your pdf reader, and print two pages of the pdf onto one sheet of paper (roughly halving the size of the images), the buildings can also be used for a more epic (6mm) scale of gaming (which is also something I'm considering getting back into).

Anyway, I have to admit that I'm rather pleased with the way it's all turned out, and I should have a few more details (and perhaps a couple more photos) regarding this first set in the next day or two.