If you've seen some of my recent posts over on the various social media networks, you might have seen that I've been trying to create a few pieces of cave terrain to add a little more interest to the battlemat. 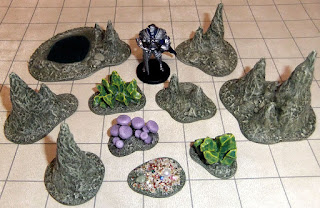 Well, seeing as how I'm reasonably happy with the results, I thought I'd share my techniques here - just in case anyone else is interested in doing something similar.

For the main structure of the stalagmites, I've simply soaked some kitchen towel in watered-down PVA/white glue, and formed them into the desired shape. 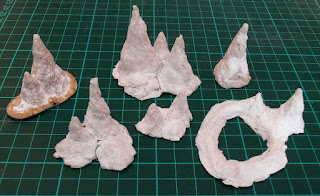 
Once they've dried, I've glued them to some cheap vinyl floor tiles (£1 for 4 at my local 'Poundland' store), and then cut around the stalagmites - leaving a ¼" inch gap all the way around (to form the base). 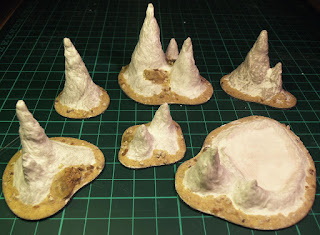 I've then rubbed some ready-mixed wall filler (spackle in the US?) over each piece - just to fill in any large cracks/holes, and to merge the stalagmites to each other (when there is more than one present) as well as the base (you can see this more clearly on the top right piece). The base can then be decorated with a bit of sand and gravel as shown.


Once everything is dry, paint them in the desired colours (for mine I've done a dark basecoat, followed by a heavy drybrush in a lighter shade, and finally a light drybrush with a cream colour) 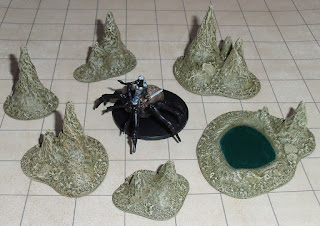 -the painted pieces with a D&D mini for scale-

For the crystal clusters I've simply glued several pieces of aquarium gravel to a small piece of vinyl floor tile that has been cut to the desired shape.

The crystals were then painted yellow, and soaked in Vallejo's 'green wash' (note that this is the only miniatures paint I've used - with the rest being the cheap acrylic tubes you may have seen in previous terrain tutorials).

Once dry, these were given a light drybrush with yellow - and then had some of the edges highlighted (which requires a bit of a steady hand).

Then, once the base was decorated to match that of the stalagmites, the crystals got a coat of gloss varnish. 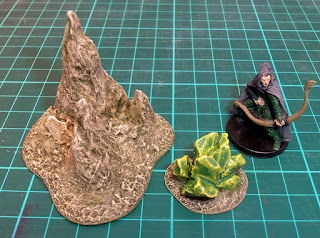 For the mushrooms I have cut out a piece of vinyl floor tile to serve as the base, and added some of the wall filler to the top - to form a small mound of sorts. 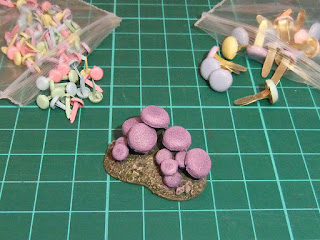 When dry, a suitable number of 'brads' (of different sizes if you can get them) have been pushed into the wall filler, and glued into place.

Then, simply decorate the base as before, and paint the mushrooms in a suitable colour (for mine, I've drybrushed lighter and lighter shades of purple on top of each other - applying less of a coverage with each shade).

For the base of the treasure pile, do the same as you would with the mushrooms (i.e. form a small mound on a piece of the vinyl floor tile), glue on some sand and gravel, and then paint it the same colour as the rest of your bases. 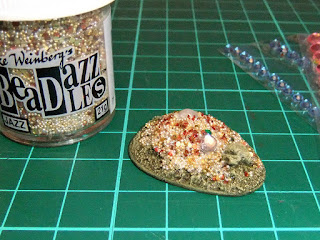 
Once dry, you can then glue on various gems, glitter, etc. (i.e. the kind of thing that folks might use to decorate cards, or nails, or what have you), and seal them in place with some gloss varnish. 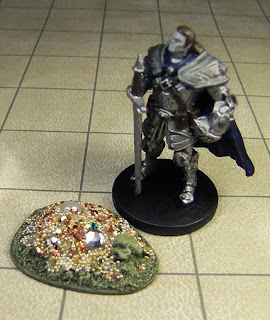 And that's pretty much it. Everything here is very cheap & easy to make - though their can be a fair amount of drying time between some of the stages (i.e. waiting for PVA soaked paper, or wall-filler to dry). 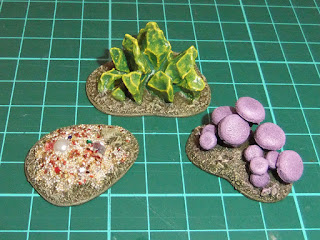 -a close-up of the treasure, crystals, and mushrooms-