Here's a quick roundup of all the Patreon funded maps I've drawn this month...

So, during April I've added 16 more of the basic (small) geomophs to the library, along with a couple of medium sized ruined/flooded areas at the request of one of my patrons (Lastlaugh70). 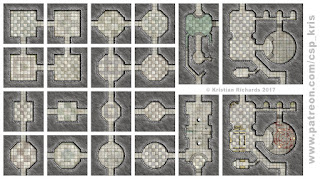 And because I had no further requests/submissions this month, I've also gone ahead and drawn the large tile (pictured on the right) on the behalf of patrons Craig Clark, Rich neves, and The one who Wasps.

For this last map I've attempted to draw an area of the dungeon that's been taken over by a group of evil cultists (or similar) -  with a makeshift library set up in the main hall, a bunch of prison cells (for their sacrificial victims) in the NE corner, and a circular 'summoning' chamber where they practice their despicable blood magic.

Obviously you could use the tile for something else entirely (and I've provided an empty version of the map too) - but I thought I'd share what was going through my mind when I was drawing it ...just in case that's ever of interest :)

Anyway, that's it for another month of maps (though I hope to be posting some more stuff for the 2.5D dungeon in the next couple of days), and all that's left to say is that you can find all of these maps (plus all the ones I've drawn since the beginning of the year) in THIS ALBUM -or- over on GOOGLE DRIVE (where they are slightly better organised).