Getting ready to run AiME

For those of you that are unfamiliar with the acronym, AiME stands for Adventures in Middle Earth - which is the latest RPG set in Tolkien's world, by Cubicle 7 (it also uses the D&D 5E mechanics - so the system will already be familiar to a lot of people ...including the folks I play with).

So, as the title suggests, I thought I would post a quick article to show some of the stuff I've been getting ready for my first real foray into Middle Earth as a GM (not counting the few horrible MERP sessions I ran as a young lad).

First up are some orc/goblin miniatures... 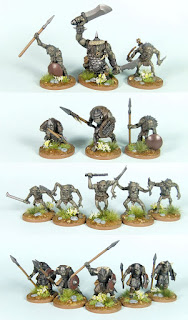 ...and these are from a variety of manufacturers, and feature a few kit-bashes/conversions. For example the guy in the middle of the top row is an old Games Workshop orc with a newer goblin head, and the one directly below him is a Mantic orc with GW 'ungor' arms. The third row are 'Goblin Town' goblins from GW, and the bottom row are the new Oathmark Goblins from Northstar Miniatures.

Anyway, as well as painting a bunch of miniatures (including a few 'specials' that I've not posted here), I've also made a few pieces of (easily transportable) scatter terrain... 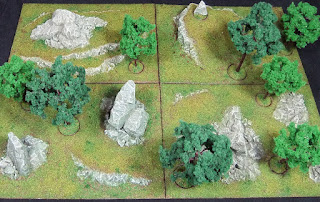 ...and I've got a bunch of other pieces (e.g. small bushes, rocks, etc.) that I can drop in the magnetic holes (to replace the trees) to make them a little more versatile. 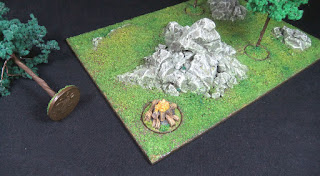 OK, next up is something a little special ...a magical weapon no less:

And finally, I have to admit that I'm a tiny bit disappointed with the lack of encounter maps in some of the AiME books. I mean, I know that The One Ring (i.e. the original system that the 5E material is converted from) is a bit more abstract than D&D (and probably doesn't need them as much) - but I am a bit of a map-freak (to say the least) ...and so I've gone ahead and drawn one of my own: 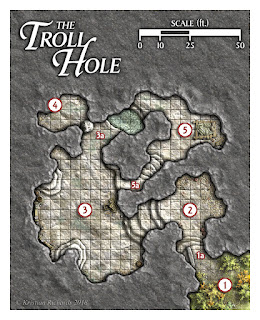 (Note that can find an unlabelled version HERE)

And if you'd like to see my preliminary notes for the place ...then here you go (note, it's just the regular D&D basics for now ...with DC numbers pulled out of thin air ;) ):

1. Cave Entrance. Although the entrance to the troll hole is hidden behind a few bushes, it is easy enough to find (DC8 Survival or Perception or Investigation test - depending on the situation).

1a. The large stone door is extremely heavy (requiring a DC18 Athletics test to move) - though it is currently in the open position.

2. Entrance Chamber. A few large (empty) jars and broken pots can be found here - along with a multitude of old bones (more than a few of which seem to be humanoid in appearance). Furthermore, the whole place is filled with a horrid smell.

3. Main Cavern. Old crates, shelves, barrels, and other oddments adorn this chamber - along with a few silver pennies scattered here and there (amongst the filth). However, due to the foul stench, if anyone spends more than a minute in this area (or further areas), they will need to make a DC10 Constitution save to avoid feeling nauseous (treat as +1 level of exhaustion). In addition, anyone who is not too proud to turn their nose up at 'troll plunder' can also gather several days worth of edible rations here.

3a. The boulder (which acts as a makeshift door to the 'larder') is very difficult to move (requiring a DC22 Athletics test). The pool to the NE is shallow and stagnant ...and is definitely not safe to drink.

4. The Larder. Any fresh meat (i.e. a live captive) is usually stored here (possibly in the process of being 'fattened-up' by the troll).

5. Bedchamber. Behind a crude pallet (which is barely large enough for a troll to curl up on), is a large (locked) strongbox containing a few baubles that the troll treasures. The key to this strongbox is usually found inside one of the sacks that the troll is using as a pillow - otherwise the lock requires a DC20 test to pick.

5a. This crawlspace (which is too small for a full grown troll to use) can be reached by a natural stairway in area 5 -or- by clambering up the ledge in area 3 (which requires a DC14 Athletics test).