Every now and again I get requests over on the youtube channel (or on social media) for additional textures and/or ideas for future videos.

Most of the time those requests are for things I already hope to get around to (eventually ;) ), other times there are ideas that I've overlooked (or would never have thought of on my own), and occasionally there's something I can put together quickly by modifying an existing pattern.

So, this latest video deals with the latter (i.e. a couple of modified textures to allow you to make a few other things):


And the idea here is that I'll continue to add to THIS PDF file over time - making it a bit of a living document that'll contain all manner of different things (including any one-off pieces, with limited use, that I might make for my own games). 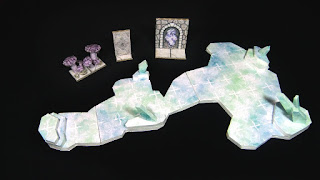 So, as I said in the video, it's always worth getting in touch if you have any ideas or requests of your own ...and though I can't promise that I'll get around to them all (as things I need for my own upcoming games will usually make their way to the top of the list) - if the request is a simple one, I might get around to it sooner rather than later!