I think we can all agree that, on the whole, 2020 has been a pretty crappy year ...I don't think that there is any argument there.

However, I've been plodding along as usual, and even though I've only gamed 'in person' a handful of times this year, I've continued to make various 'print & paste' terrain pieces - in the hope that I'll eventually be able to put them to use when things get back to normal (fingers crossed that'll be sometime next year).

So, as you can see in the picture below, that's kept me quite busy, and has included things like: stirge miniatures, circular rooms, various bits of decorative/scatter terrain, spiral stairs, mine tiles, puzzle handouts, and (of course) the new buildings. 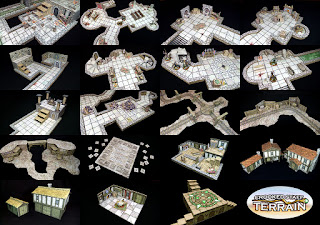 And if you're not familiar with the whole 'print & paste' concept ...I design paper printouts that can be glued to bits of cardboard/foamcore, drinking straws, toilet roll tubes, etc., to help folks (myself included) make cheap terrain for RPG's/wargames.

Note that the printouts can be downloaded from DriveThruRPG (they're pay-what-you-want ...so grab them for free if you like), and the assembly instructions are on my YouTube Channel.

In addition to the physical tiles/terrain, I've also been adding to my library of smaller map tiles that are suitable for online play (using a virtual table top - like Roll20 for example) ...and here's everything that I was able to draw this year... 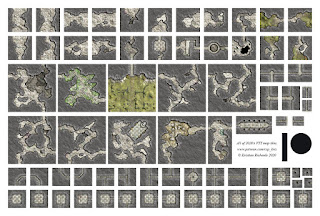 ...and the idea behind these is that you can piece several of them together to make your own dungeon maps - i.e. something like this: 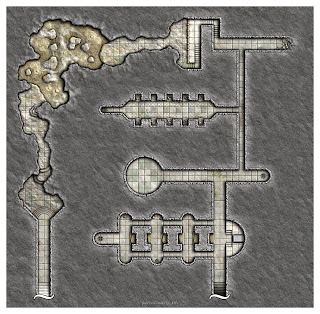 Furthermore, the guys who run the 'fantasy calendar' website also got in touch - and I agreed to let them use these tiles in their online random dungeon map generator - which you can find HERE.

And if you check it out, you'll see that they've done a really good job (as I say, I'm only responsible for the artwork - all of the generator stuff is a result of their own hard work).

Note that all of the map tiles that I've drawn thus far (i.e. since the beginning of 2017), have been compiled in THIS album.

Anyway, since I'm on the subject of online play and VTTs, I've also been running an online (5E) Barrowmaze game for some of my Patreon supporters ...and I have to say, it's been really fun so far.

If there's one good thing that's come out of 2020 for me, it's this game - as everyone has been super nice, and a pleasure to run for. I mean, I'm not the best GM in the world (not by a long shot), and I was really nervous about running a game for people I didn't know - but it's become something I look forward to each and every week.

And while we're never likely to meet in person (as the group is scattered all around the world), I thought it would be fun to paint a miniature for each of the characters. So here's the group as it currently stands (though each session  typically includes anything from 3 to 5 players - depending on folks' schedules). 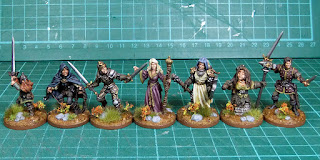 So yeah ...I think that's most of the stuff I've been working on this year - though there's always a few random things thrown in here and there... 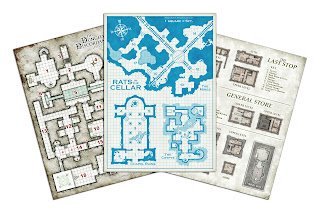 ...like these maps, and various half-finished projects - along with one or two things that I've probably forgotten about or abandoned completely :)

So, what can you expect in the new year...

...well, it looks as though the YouTube channel might actually hit 10K subscribers at some point (which is a really big deal for me - I never expected that many followers), but luckily I still have tons of print & paste ideas that I want to try out (and a to-do list as long as my arm) - so I hope to keep this going for quite some time yet.

Furthermore, I don't think I'll ever get tired of drawing maps (and thinking up encounters to go along with them) - but I'm probably going to put up a poll on the Patreon page before the end of the year - just to see what direction I take next.

And, of course, I hope to keep the Roll20 game going for as long as folks are willing to put up with me :)

Anyway, thanks for getting this far ...all that's left to say is that I hope you're all having a good holiday period (hope you got lots of gaming goodies if you're celebrating this time of year), and here's hoping that next year will be better than this one.

Oh ...and if you're not already a member of the Discord, come on over and say hello!