At the beginning of the month I announced that, during the course of January, I would be filming a dungeon 'build along' mini-series - with the aim of showing folks how to make a simple dungeon layout using some of the print & paste techniques.

So, if you want to watch the entire series over on YouTube, you can find the complete playlist (containing all six bite-sized episodes) HERE.

And if you're interested to see what can be made with just 4 printouts and a bit of cardboard... well, here's the resulting mini-dungeon: 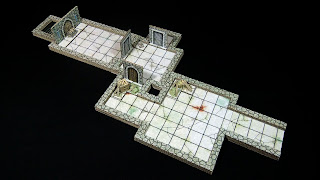 And it's my hope that this little series will be a good introduction for folks who are new to the idea of using terrain in their games, while at the same time allowing me to re-do a few things that were covered in some of my earlier videos (which haven't aged all that well if I'm totally honest :) ).

Alternatively, if you've been following the regular episodes for a while, but still haven't got around to making anything yet - then this might be an ideal project to get the ball rolling.

Anyway, whether you decide to have a go at making this dungeon or not, here's hoping that the mini-series provided you with a few new ideas and/or reminders, and that it will be a good example to steer people towards when they ask 'what should I make first?' (as a little dungeon is always a good place to begin - right? :) ).