Before I go into all the details (as I know that talking about money can be a  bit contentious - plus it's not something I'm entirely comfortable talking about at the best of times) I just want to say that NOTHING IS CHANGING - this is just going to be an additional/alternative way that folks can support the channel - if that's something they're interested in doing.

Anyway, YouTube Memberships have been available for some time now, and a little while ago I began the process of setting one up for the Crooked Staff Terrain channel. However, I never completed the process - for fear that folks might think that I was getting a bit too greedy (as I already have a Patreon and all that).

However, since then, a few folks have inquired about me setting up one of these 'memberships' ...and so I have decided to give it a try! 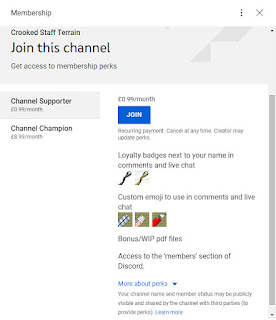 That being said, I'm really NOT looking to double-dip (if that makes sense) - this is just going to be an ALTERNATIVE way that people can support the channel financially (if they insist on throwing a few coppers my way :) ).

So if you already support me over on Patreon ...there's no need to do this membership thing as well.

Similarly, if you occasionally pay a dollar or two for the pdf files over on DriveThruRPG ...then there's no need to do this membership thing either.

On the other hand, if you want to support the channel, and (for whatever reason) you would find youtube's membership system a more convenient way of doing so - then that's now possible.

For the 99 pence option I might occasionally share some work in progress pdfs for you to have a play around with - for example, I recently shared  (over on Patreon) the preview pdf that you can see here... 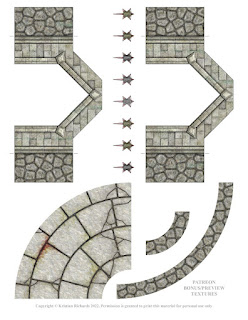 ...parts of which have since featured in a couple of videos. So, it'll essentially be the same as the $1 Patreon pledge (which is why you definitely don't need to subscribe to both).

Similarly, there's also an £8.99 option - which will be the same as the $10 Patreon pledge ...in that, while you're a member at this level,  you'll also get your name (or nickname/handle) listed in the credits at the end of each video. 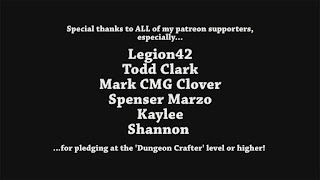 Admittedly, these aren't great rewards (though I am open to other ideas) - but, as I said at the beginning of this post, I'm NOT going to be hiding any of the finished pdfs/videos behind a paywall or anything like that ...that's NOT the idea behind this at all!

This is just an alternative way that folks can support the channel if (for whatever reason) they don't like using Patreon, or DriveThuRPG, or whatever. Essentially, I'm just trying to cover as many bases as possible (though please don't ever feel obliged to subscribe to any of this nonsense ...just give the video a like, and I'm happy to call it even ;) ).

And that's all I have to say really. So thanks for reading down until the end of this post, and here's hoping that you're still finding some of this stuff useful!