So, I finished up another squad of Colonial Marine miniatures last week (I'll try and post pic's at some point), but I've been at a bit of a loss about what to do with regard to getting some reasonable looking Alien/Xenomorph miniatures.
Anyway, after a bit of googling I stumbled upon the Dawn of the Lead Blog (and in particular THIS review) which details a few different ranges of official and not-so-official 'xenomorph-style' miniatures. The review itself is a great one, and my first choice would probably be the latest 'clix' miniatures - though they appear to be quite rare now, and go for (what I would consider) a ridiculous amount of money on ebay.
However, I've also noticed that em4 miniatures have recently made their (usually pre-painted) sci-fi alien range available as individual (unpainted) models - and the feeder model (second from the bottom of THIS page) looks like a good candidate for a bit of conversion work (or could probably be used as-is if you're not too fussy).
So I went ahead and ordered a couple (they are only £1.55 each after all), and I also got hold of a few 'lurker heads' from Heresy Miniatures (the same ones mentioned in the DotL review) - and set to work with a pair of clippers, superglue, and some greenstuff ...and here's the result: 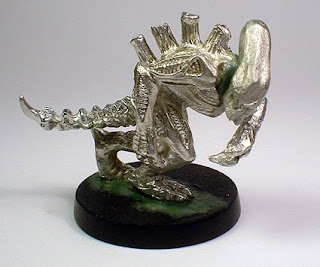 While far from perfect, I think it's a passable Alien/Xenomorph miniature ...and also doesn't cost the earth (unlike the original Leading Edge mini's or the latest 'clix' models). However, because there is only one model (and head) to work with, varying the pose of the miniature is going to be a little difficult - but bending the tail into different positions, attaching the head at various angles, and (like in the picture below) altering the position of the arm, does offer a bit of a different look ...though admittedly not all that much. 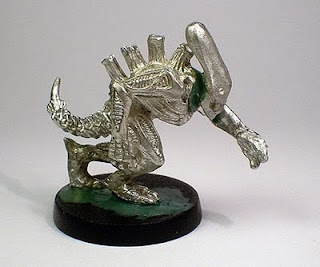 However, on the whole, I'm satisfied with the result, and I'll try and post some finished pics (perhaps alongside a few 'colonial marines' - for scale purposes) when I've given them a lick of paint.