A little while ago I mentioned that I might scale back the Map-A-Monday project a little (perhaps to one map per month rather than one every week) - just to free up some of my time for other projects.
However, when I started the project I did say that I was going to try and keep it going for an entire year - and since I'm more than half way there, I think it would be a shame to stop now.
So (as you've probably guessed), I'll be continuing to post a new geomorph-style map every Monday throughout 2011 ...just like I originally planned - which is (hopefully) good news to those of you who've been following the project.
But if that's not good news enough, I've also taken the first map from The Little Book Of Dungeons - Volume I and blown that up to battlemat scale too - which can be downloaded (for free) from DriveThruRPG and RPGNow... 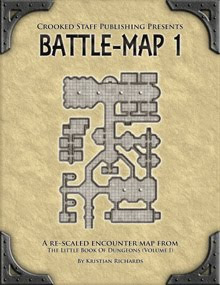 ...and already it's got a couple of nice reviews :)
Others will probably follow, but I'll likely have them available for a dollar or less.