Since my main computer is dying a slow an agonising death, I've been digging around on my hard drive this past week (in-between writing some new Age of Shadow material), and been rediscovering a few little projects that I've started work on ...but not got round to finishing yet.

One such project was a new style of Colony 19 tiles ...a prototype of which can be seen below: 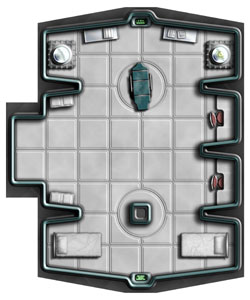 However, I was thinking that, since this room could quite easily be used in conjunction with the existing tiles as a basic med-lab (or similar), it might be a nice idea to make it available as a free download (i.e. similar to THIS one).

So what do you think? Would you rather I wait until I have a whole set completed in this style? (as there is a chance that the final style may end up being slightly different to this prototype), or would you just like to get your hands on this room as is stands?