As most of you probably know, I have a number of free products available over on RPGNow (most of which also serve as examples of various product lines), and if you've been following me over on G+ or facebook, you might also have noticed that I've recently put a basic 'overland' map together - whose key features can be represented by a few of these free products, thus creating a nice little encounter location for folks to slot into their games. 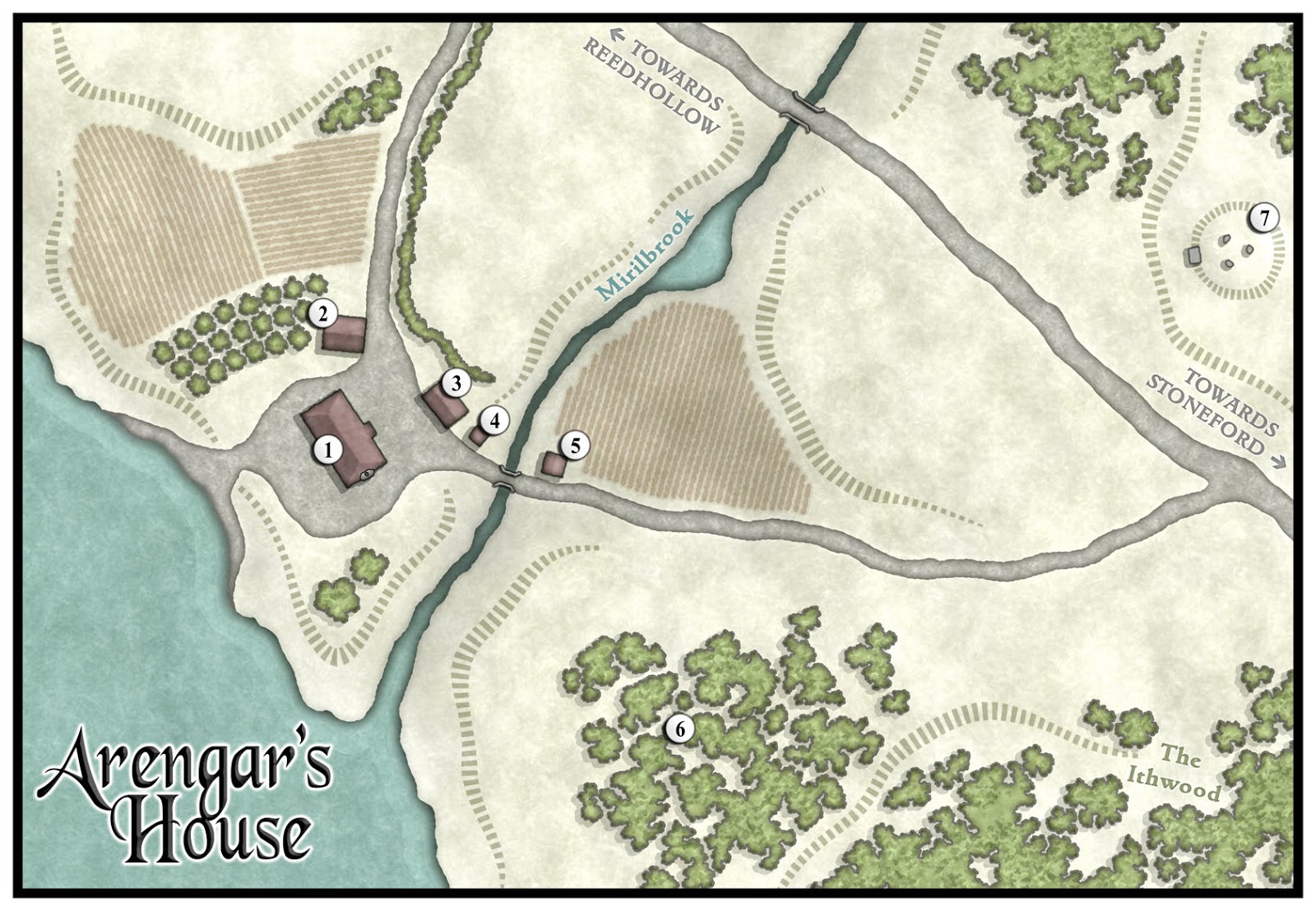 So, before I go on to tell you a little more about Arengar's House, here's a list of all the free (or in some cases pay-what-you-want) products you'll need to populate the map:


What follows is a brief description of this location, which might serve as a springboard for a random encounter or two - or simply provide a safe place for characters to rest up for the night.

(note that, where applicable, statblocks and names for the Age of Shadow RPG have been provided - though these can of course be ignored if you're using a different game system or setting)

Arengar's house is located on the eastern bank of the Lunuin River, approximately half way between the (human) settlements of Reedhollow and Stoneford. The house itself is somewhat distinct in appearance, with pale stone walls and overlapping roof tiles that suggest an elvish origin (even though it appears slightly more utilitarian in design than most), which is served by a smaller road that arcs away from the main road (in a vaguely crescent shape) and back again.

It's original purpose (centuries ago) was that of a way-station for errand riders carrying messages to and from the Eyries (i.e. the great elven fortresses to the north of here) - being a well provisioned staging post where both fresh horses and riders were readily available. However, during the past few years that function has been taken up anew (though to a lesser extent), largely due to the increased activity at the Eyries of late (almost as if Arengar had been waiting here apurpose).

As such, several horses are picketed in the fields surrounding the house, or (if they are one of Arengar's own beasts) allowed to wander freely.


ARENGAR
As elves go, Arengar is fairly unexceptional in appearance (being practically average in every way), with sandy hair shorn about his shoulders, and a quietly confident, though unassuming, manner. Yet his skill and mastery of aught that goes on four legs is second to none - so much so that he has become known as Arengar Oborher (Arengar horse-master) - being indeed a distant relative of Calibor Oborher (and so alike to him, in both skill and temperament, that he has earned the very same epithet).

However, what sets Arengar apart is the fact that a freak riding accident (in which he sustained severe head injuries) robbed him of his sight while he was still a young man. Yet, despite this, he retains a love of horses - and those few that he breeds are considered to be the finest steeds east of the Luniun river (and, as such, are highly sought after).

Indeed, Arengar's reputation as a horse breeder extends throughout most of the eastern portion of the Northern Kingdom, though he himself rarely ventures far from his own home - where he has dwelt in peace for many generations of men. 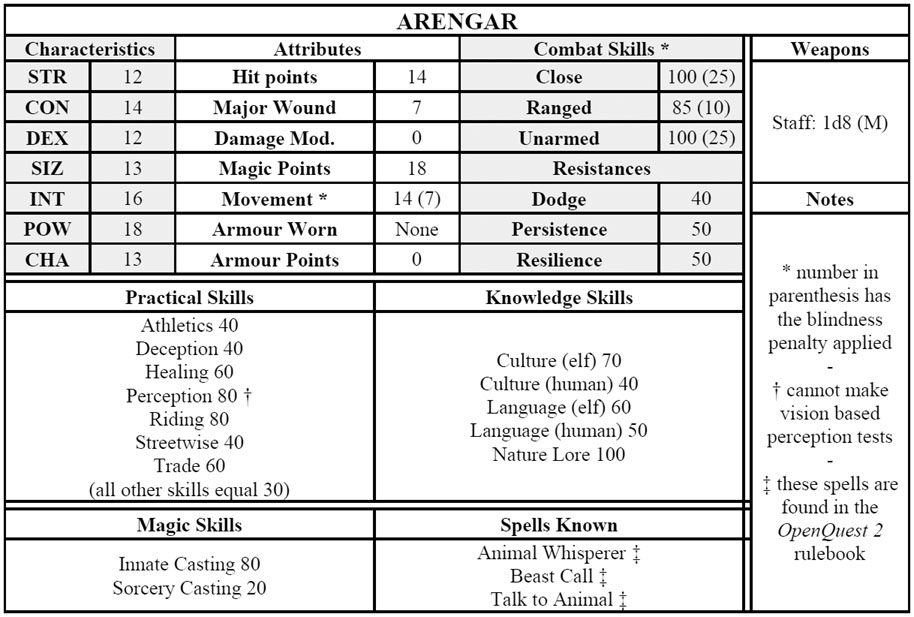 *Note that Arengar's movement has been halved (rather than divided by four) as he is well accustomed to his blindness. However, the GM may decide that he is not hampered at all in areas that are very familiar to him (his own house for example).


ARENGAR'S HOUNDS
Whenever Arengar is abroad he is always accompanied by at least one of his dogs (great elvish wolfhounds named Honlorin and Bramhon), which assist their master and alert him to (or guide him around) any potential hazards (a feat which is aided greatly by Arengar's ability to understand the speech of animals*). Indeed, both Honlorin and Bramhon appear to be more intelligent than most canines (as is often the way with elvish hounds), seeming to comprehend much more than any animal ought to, and are as dear to Arengar as close kin.

*in game terms Arengar has the Animal Whisperer, Beast Call, and Talk to Animal innate spells (as featured in the OpenQuest 2 rule book by D101 games).

THE OLD BARROW
Many rumours surround the origin (and occupant(s)) of the old barrow to the east of the road, and it is believed to have stood there for several centuries (perhaps even dating back to the great wars of the north). However, if Arengar knows its secret, he seems unwilling to share that knowledge, revealing only that it is named 'Cauth-an-Amandess' in the elvish tongue (the mound of the shield maiden), and that the sorrowful sound of a woman's voice can sometimes be heard upon the mound when the moon is full and the wind is in the east.