This week I've been having a go at painting up some more Reaper Bones miniatures - as last week's mini's were a little bit hit and miss to be honest (and I didn't want to judge the entire range on the basis of one bad miniature). Furthermore, I've also taken this opportunity to try out some different (brush on) matt varnishes.

Anyway, first up is 'Boneflail' (a gnoll cleric)... 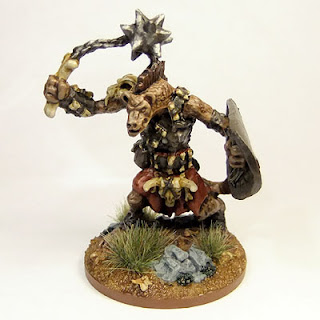 ...and I was rather happy with the way this one turned out until I varnished it with the Army Painter 'anti-shine' varnish (which, despite its name, has left a pretty shiny finish, and seems to have obliterated a lot of my highlighting).

Next up is 'Bloodhoof' (a minotaur barbarian)... 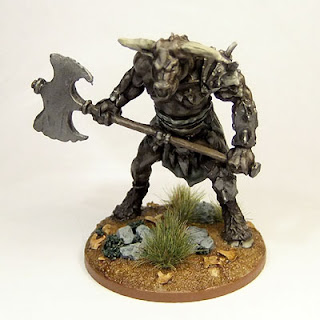 ...and for this one I thought I would try a darker skin tone for a change (which hasn't photographed very well), and have varnished it with Vallejo Matt Varnish No. 70.520.

As you would expect, the varnish has toned down the highlights a bit (as most varnishes do), and (once dry) has left a bit of a shiny (satin-like) finish ...but it's nowhere near as bad as the Army Painter stuff. 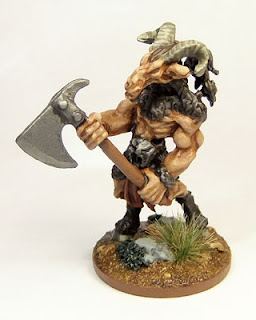 ...which I've painted in a fairly stereotypical colour scheme, and varnished with Coat d'arms matt varnish (which has still dried a tiny bit shiny if I'm honest - though this is probably the best one of the three). 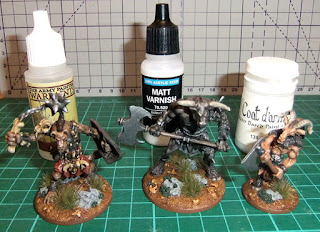 So, despite my initial disappointment with the Bones 'wererat' miniature that I painted last week, I'm pleased to say that these three miniatures (along with the spiders I also painted last week) have left me with a much better opinion of the range ...though I have to say that cleaning up the mould lines is a bit of a pain - so I've just let them be if they didn't look too obvious).