For this week's project I've made a couple more pieces of 'creepy forest' scatter terrain, and slapped some paint on another little adventurer mini :) 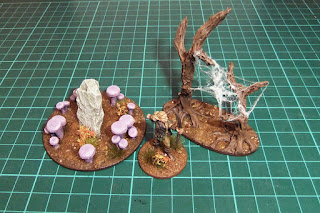 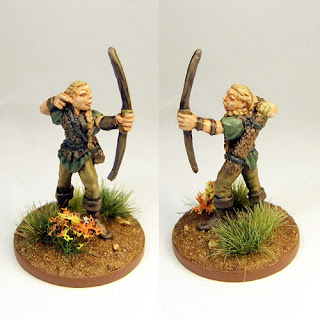 The figure is from Midlam Miniatures (THIS ONE), and for some reason I had all sorts of trouble painting this one (though I can't fathom out why - so I must have just been having an off day) ...but it's turned out OK in the end :) 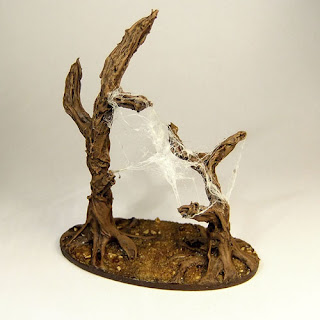 Next up was a little test piece to try and add some large cobwebs to the current set of scatter terrain (which looks kinda OK - but not OK enough to warrant me making more). But, for those who may be interested, the webs were made from a baby wipe that's been left to dry out overnight, and then pulled apart and soaked in PVA glue (much like I did in THIS post, when I made the web covering the spider eggs). 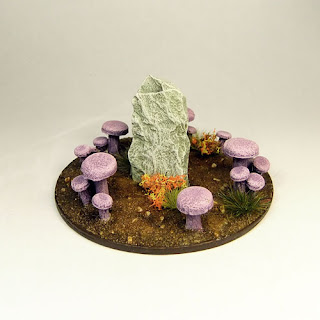 However, I'm much happier with the standing stone that's surrounded by a fairy ring of giant mushrooms (pictured above)... 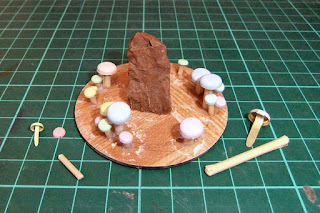 ...and, like before, the stone was just a piece of gravel (stolen) from the garden path, and the mushrooms are two different size 'brads' (i.e. the things you use to pin paper/card together) that have had their prongs clipped off and replaced with pieces of cocktail stick or BBQ skewer.

So, all in all, another productive week on the miniatures front ...or at least it was when measured against my usual snail's pace :)