Something I've mentioned a couple of times before (on various social media sites), is the fact that I have a basic/emergency/travel GM's kit that I put together a while back - which I usually toss into my bag when gaming away from home.

It's not anything special - just something I can use to run a quick one-shot game if a few folks are missing, or to borrow to whoever might be GMing that day if they need to sketch out a quick tactical map, and so on.

Anyway, as I say, I've mentioned it a few times now - so I thought I'd post a couple pic's to show what it includes... 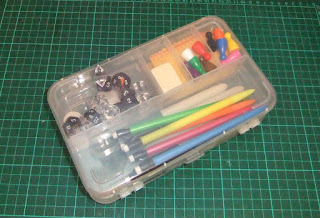 Side one of the double sided case (it measures around 8" x 5" and I got it for £1 from poundland here in the UK). 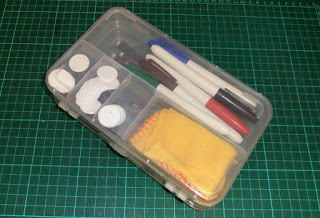 Side two of that same case (did I mention it is double sided ;) ). 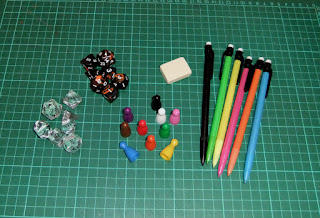 The contents of side 1 (two sets of cheap dice, tokens that can be used for PC's / important NPC's / boss monsters / etc., and a few pencils & erasers). 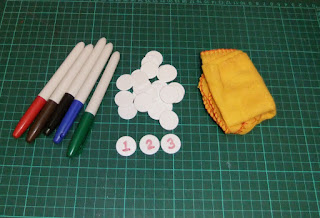 The contents of side 2 (cheap markers, tokens for regular monsters, and a cloth to clean the tokens & battlemat). 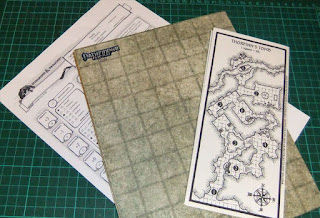 A Paizo flipmat (the plain/basic one), and then maybe a few pre-gens, and a simple one/two page dungeon.

If playing 5e D&D I also have the 'rules on one page' free download that you can get from the DMsGuild (not my work BTW), and I generally print out a couple of monsters from the basic rules pdf (though most of the stats can be looked up on a phone - via the roll20 compendium for example). These, along with the items from (5) go into one of those thin folder/wallet thingies.

Anyway, even though I've only used it (or bits of it) a couple of times, it's proved to be a useful little toolbox :)