Over the holiday period I thought I would have a go at something a little different (a little different for me anyway) - and roll up a random dungeon using the tables in the back of the 5E dungeon masters guide .

And yeah, it might be surprising to learn that (considering how long I've been playing ...off and on) that I've never done anything like that before; I mean sure, I might have used a random table here and there within a dungeon - but I've never actually rolled up an entire dungeon that way.

Anyway, the first step was to roll up the layout of the dungeon itself - so I opened up photoshop, rolled the dice, and this is what the tables gave me (though I did need to make a few alterations here and there - to make passages line up, make rooms smaller, and so on, just to get it to fit on a single page): 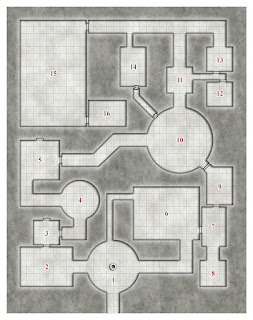 Next, rather than picking a room and then rolling for it's purpose, contents, etc., I instead rolled up a list of purposes (from the 'general dungeon chambers' chart) and then tried to arrange them in a sensible manner (i.e. it makes sense to put the 'cell' next to the 'torture chamber' - and not at the opposite end of the dungeon). So, with that in mind - this is how I assigned them:

Then there are a whole bunch of tables for 'chamber contents' as well as 'dungeon dressing' and so on - so once again, in order to try and have things be as cohesive as possible, I rolled up my lists of contents/dressing first ...and then assigned them where they seemed to be the most appropriate.

For example, room 10 ended up being something like this:

Contents: Trick (on the tricks tables I rolled up a suit of talking/spellcasting armour)

Features/Furnishings: Bones & teeth (I actually took two items off my 'features' list for this one ...as I knew I could use multiple 'furnishings' in another room).

So, seeing as how that's all the information I had to work with - this is how I tried to tie it all together:

10. Training Room
Examining the ash reveals that it also contains tiny fragments of charred bones and teeth. In addition, a successful (DC11) Perception test uncovers the fact that a strange mumbling sound seems to be emanating from the armoured dummy itself (a further DC14 Arcana test also reveals it to be fragments of fire based evocation chants). However, should any living creature approach within 15ft of the dummy (i.e. cross into the area beyond the pillars), the chanting will increase in volume and the dummy will spring into action.

Treat the dummy as Animated Armour except that it has 50hp, is immobile (and thus grants its attackers advantage on their attack rolls), and instead of attacking with its slam attacks - each round it can be heard uttering an incantation (roll on the table below to determine the effect).

Once defeated, a serviceable (though probably in desperate need of repair) set of +1 half-plate armour may be salvaged from it's ruin.

6 ...Blast of fire: DC13 Dex save (as fireball but deals 1d4 fire damage to everyone within a 15ft radius of the dummy, and 1 point to everyone else in the room)

Now I admit that this was one of the more complex rooms, but even so, taking the random elements and tying them all together was a fun little exercise ...one which led me into some unexpected places.

However, I'm not going to pretend that the finished dungeon is a particularly great example of the kind of thing you might expect to find in the latest version of the game (with regard to dungeon ecology and so on) - but I have tried to have it make as much sense as possible ...considering what I had to work with.

Anyway, since finishing this fun little experiment (yeah, my idea of fun is a little weird) I've turned the whole thing into a A5 booklet/zine type thing (again, just for a bit of fun) - and if you want to check it out, I've uploaded it to google drive HERE. 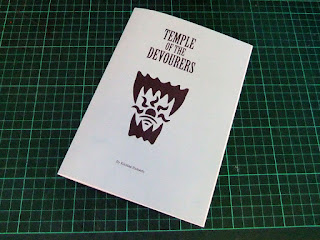 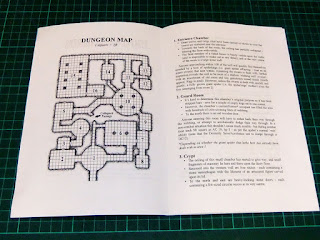 And if you do take a look, let me know if you find any errors (as there's bound to be a few).

As I say, it's not anything special, but it was an interesting little project nonetheless :)