As usual, I've got several things that I'm currently working on for the print & paste terrain (giant spider miniatures, a water-wheel and treadmill crane, to name just a few), plus a whole bunch of stuff I'm excited to announce when the channel hits 10K subs. But, like the title says ...I've got sidetracked by another little project.

Well, I say little, it's tiny really (at least in scale) - but let me explain the idea first (note that something similar to this was suggested by a viewer - but I can't remember who that was now)...

Anyway, even though I like to draw maps (something you'll be well aware of if you've followed me for any length of time), I've never really liked drawing town/village maps (and as far as city maps go - that's a big NOPE).

(note that, while there are several generators and various software packages that can help in that regard, and I do use stuff like that from time to time, it's not something I ever really get very excited about using)

On the other hand, I do tend to drool over pictures of folks' town/city/village terrain set-ups (a whole table of Dwarven Forge's city stuff for example) ...I mean, it just looks so darn cool.

However, for my own games that kind of terrain is probably not going to get much use (as 'town stuff' is much more likely to be 'theater of the mind' - as all the cool kids are calling it nowadays) - plus I wouldn't have the space to use more than half a dozen buildings at a time in any case.

But what if I were to combine the usefulness of a map (I mean, it's always good to have a map to show the players right?) and the 'coolness' of some 3D terrain ...and maybe make something like this: 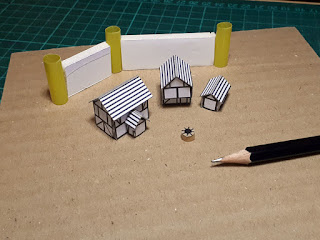 (note that these are very early WIP/prototype images, so there's no proper 'textures' glued to anything yet)

As you can see, they're pretty small - and you could probably fit a whole village into an area the size of a single sheet of paper.

They're also pretty easy to put together too (if you've assembled any of my chests and crates, it's a very similar process). Here's a quick look at the underside (which might make things a bit clearer):

Furthermore, due to the way I'm designing them, they'd be the same size/shape/colours/etc. as the 28mm scale buildings that I've already made (just a LOT smaller). So I could make the whole village in this tiny scale, and maybe just the main building at the larger (miniatures) scale ...if I'm planning a specific encounter there. 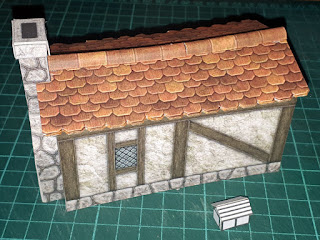 I could even go a step further and develop some kind of hex-builder-system (where each hex tile would be big enough to contain a handful of small buildings, or a single chapel, or a villa, etc.) - so that I could use them over and over again to create a bunch of different layouts.

Does that sound like madness? ...or is it actually a good idea?

Is it something you'd use yourself? ...or does it fall into the 'it looks cool, but I'll pass' category?

For my own part, I do have to admit that I'm far more excited about attempting something like this, than I am about sitting down and drawing a bunch of village maps :) 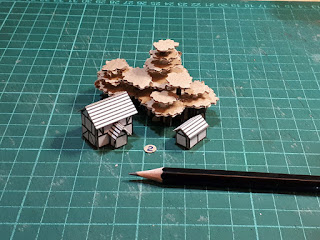