It's been over a month since my last video (for 'reasons' :( ) ...but I've finally got another one finished...

...anyway, the idea behind this one is that maybe it was once part of a prison complex - so the prisoners cells would be on one side of the pit, and the guards (and the bridge controls) would be on the other. Thus, should a prisoner escape their cell, they'd still have to find a way to navigate the pit (hopefully that made sense :) ).

Now though, in the hands of the goblins, it could be used as a kind of monster spawner ...with several goblins being transported from one side of the pit to the other each round to harass the players (who find themselves approaching the pit from the old prison area).

So maybe the players stand and fight each new batch of goblins as they appear ...or maybe they use ranged attacks to try and pick off a few of the goblins working the winch ...in either case I think it will make for a fun encounter.

But enough of all that ...if you want to have a go at making one yourself, then the (pay-what-you-want) pdf file can be found HERE.

PS. here's a sneak peek at what's coming up in the next video... 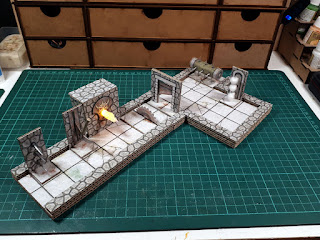