Disclaimer: The items discussed in this article were sent to me free of charge.

I was recently approached by the folks over at easyrollerdice.com regarding the possibility of reviewing some of their products. However, even though I made them aware of the fact that I'm not really a review channel (i.e. the best I could offer is to show some of their products in the pictures that appear at the end of my videos), they wanted to send me some stuff to take a look at anyway.

So, of course, I agreed (in fact they seemed to like the approach I already use for the miniatures I show - i.e. nothing fancy, just a little note stating who the manufacturer is in the corner of the video) - though I thought it would be nice to do a full review (my first real review) here on the blog for anyone who might be interested - so here goes... 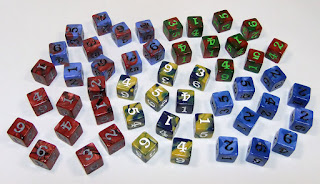 And while there's not a lot that can be said about the humble six sided die, I will say that I really like the numbering on these ...it's a large number in a nice font. Obviously, if I was purchasing them myself I might have opted for different colours (but that's very much a matter of personal preference) - but the dice themselves don't have any imperfections that I can see ...so what else is there to say :) 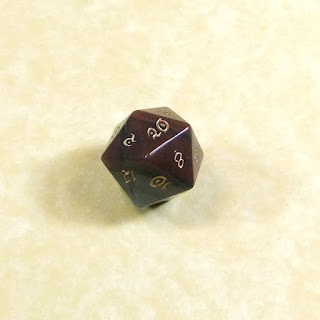 ...however it still looks similar to any other 20 sided polyhedron right? ...well, I suppose so, but you really have to hold this one in the hand to appreciate it. It just feels nice. It's the kind of dice you need a dice tray for (and not just because it's made of stone).

Looking at their website it looks as though it sells for around $20 ...so it's probably not something I would have thought about buying myself (it's more the kind of thing I'd stop and admire at a convention, or perhaps buy for a player who is celebrating a milestone birthday, or something like that) - but now that I have it, it's definitely going in my bag of favourite dice (yes I have one of those), and will probably get used for tense dice rolling situations ;)

OK, since I just mentioned dicebags, I'll move onto those next. So, I was actually sent 2 different bags - the first being a regular sized one with a Cthulhu style print... 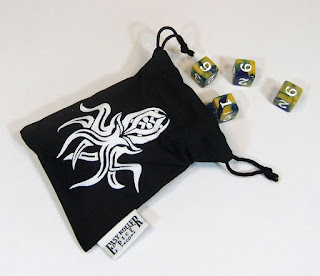 ...and a much larger (faux-velvet) style bag (with a similar 'iron-on' design) that's actually reversible ...which is a nice touch (I think I like the green side best). 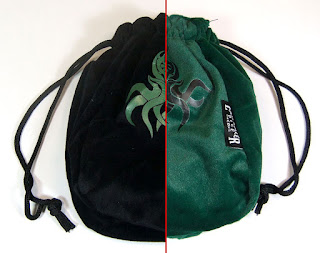 Much like the d6's, it's hard to wax lyrical about dice bags ...they have one job - to hold dice. But these do seem well made, and the large bag should be more than adequate to hold all of the dice owned by any sane person* (as you can see in the following image, there's still a ton of space with all 50 of the d6's thrown inside). 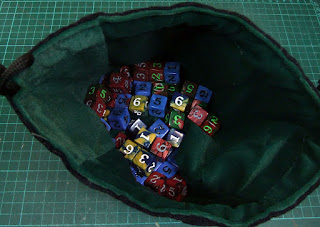 *it is possible that I might own more dice than the average person :S

Once again, both of these are the kind of thing I'd normally think about buying... but then decide that it will probably have to wait until I have a budget to allow for such extravagances. 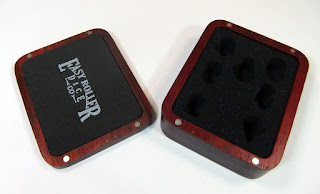 So yeah, the magnetised lid is a great addition ...and the magnets are pretty strong (I shook the hell out of this one and the lid isn't going anywhere) - though I'm not quite sure why (what I assume are) the two d10 holes are slightly different... 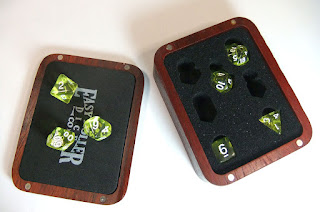 ...I mean, both dice are the same size - and it's easy to see which is which just by looking at them... but maybe there is something I'm missing? 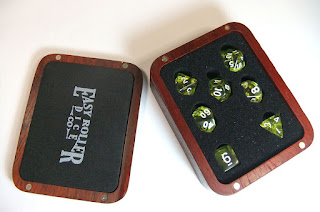 However, my only real issue is the fact that I feel like a bit of an uncultured swine putting one of my cheap dice sets inside (kinda like chugging cheap lager out of a champagne glass) - so I might have to buy myself a nice set of cthulhu dice to do it justice* (as a nice dice box deserves a similarly fancy set of dice).

*I mean sure, my characters will still die horribly or be driven insane ...but at least I can do it in style :D

Anyway, I thought I would save the best until last... so here's the second 'box' that they sent (though box is far too poor a word): 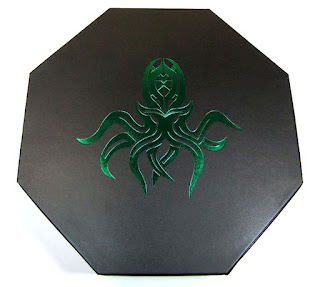 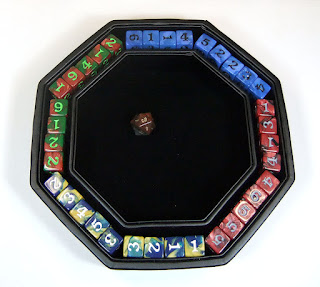 As you can see, it serves as both a storage/staging area for your dice, as well as having a 'dice tray/rolling' area in the middle.

And if I'm totally honest with you, I would normally just pass something like this by and assume that it would be far too expensive for a regular Joe like me (it being a bit of a premium product) ...but looking at the website, it's listed at around $35 (roughly £25) ...which is about half as much as I expected.

So yeah, that's all I really need to say - but I'll continue nonetheless ;)

Now, I've obviously not had it long - so I'll probably need to revisit the review in a year or two (when it's seen plenty of use, and has been rattling around in my backpack as I travel to and from various games), but it seems pretty sturdy, the lid is a nice snug fit, and it can fit 5 whole sets of dice around the edge (that's dice of the usual RPG variety - i.e. d4 through d20).

I'll also admit that when I first found out that I'd be receiving some 'free stuff' for review I thought that I could pass some of the items on to a few of my gaming friends (rather than hoard it all myself) ...but not this one ...this is mine ...my own ...my precious ;)

So yeah, here's hoping that you found this first little review of mine interesting and/or informative ...I suppose there's only two things left to do:

1) I'd like to thank the Easy Roller Dice Co. for sending me so much stuff to take a look at (colour me impressed)...

2) put some of this stuff to use and roll up a new character. So here goes...

Email ThisBlogThis!Share to TwitterShare to FacebookShare to Pinterest
Labels: review