As you can see in the picture below, I've recently been working on an idea for a larger doorway (one that works in a similar way to the archways - in the sense that the whole piece acts as a kind of 'clip-on' that covers two adjoining walls). 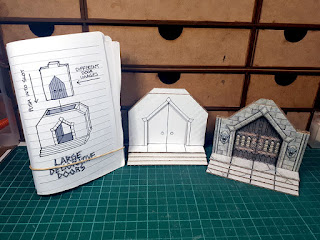 (from concept to completion)

And because the whole 'steps and frame' assembly is the most time consuming part of this project - I decided to make the doors as separate/removable pieces - so that they can not only be used to represent open and closed versions of these doors, but it also enables us to insert different door designs into the frame ...for a bit of added variety.

Anyway, as usual, I have a video showing how I made them over on youtube (if you're interested in checking it out):

In other news, the 'super thanks' feature has just become available for the channel... 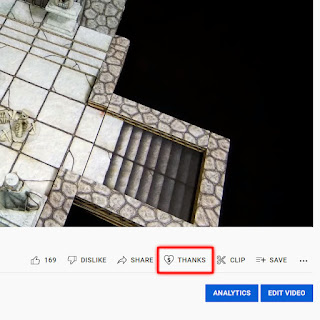 ...and, while talking about money/donations/subscriptions/etc. can be a bit of a touchy subject (I normally try to not harp on about my Patreon etc. during most of my videos), it is an unfortunate necessity - and so I've decided to enable it (just in case folks would like to support me that way ...as every little helps).

And, if you've got this far, then here's a quick preview of something that I'm working on at the moment...

...which is basically, just a way of making curved passages that are better suited for 'two abreast' situations - as the normal grid doesn't work all that well for these kind of tiles ...as can be seen in the comparison images below: 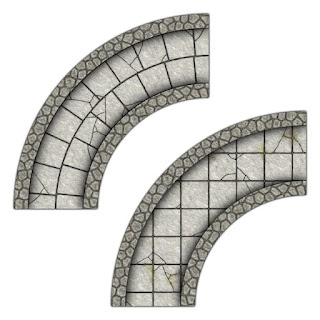 (though you can, of course, assemble them either way - depending on your tastes).

Anyway, that's it for this update. I hope you are all safe and well, and thanks for your continued interest in all of this nonsense of mine :)