It's been a productive month so far - starting with this video - where I turn one of those cheap(ish) nail varnish/polish stands into a miniatures display:

...and here's a picture of it 'in action' so to speak. And I have to say I rather like it (I've actually got a couple more on order, now that I know that it works :) ). 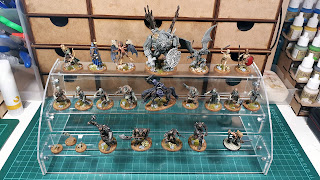 In addition to that, there's also been a new episode of the Print & Paste terrain...

...which features a few gargoyles (that can be used as dungeon decoration ...or even miniatures at a push).

And that has been followed up with another 'tips & tricks' episode - where I make a decorative plinth for these gargoyles to stand upon:

And that's not all. I've also started work on an idea for a large decorative doorway:

...so imagine a 'stepped base' that spans the wall between two tiles (in much the same fashion as the recent 'archways') - and there being a couple of different types of door to choose from.

So yeah, I'm keeping busy as usual ...and still finding time to mess around with some of the new Army Painter 'speedpaints' - which I'm having mixed results with if I'm perfectly honest :S 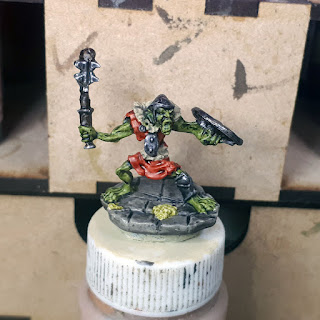 And since I don't have a game this week, I might jump in the voice/video chat on Discord this weekend (probably Sunday around 6 or 7 pm UK time) and do some more experiments. So feel free to stop by and join me if you're also at a bit of a loose end!