"They're coming outta the goddamn walls..."

Since I'm really in the mood for some sci-fi/survival-horror gaming at the moment, last week I decided to do a quick paint job on some of the em4 'trooper' miniatures that I have lying around:

As you can see they are very much in the style of the Colonial Marines from the Aliens movie - and so I have attempted to paint them as such (though without the camo patterns - partly because I'm not that good a painter, and also because I wanted to get them finished reasonably quickly). I also tried something a little different with these - and used two different (brush-on) varnishes in order to give the armour/weapons/boots a slight glossy finish, and the skin/cloth a matt finish (which I think has worked out reasonably well).

Considering the price (a whopping £1.28 each, complete with a round base and pre-primed), they are really nice miniatures, and not overburdened with too much fiddly detail or OTT gear and weaponry. They'll also be perfect for the new floor-tiles I've been working on (an example layout of which can be seen below) ...though I now have to see if I can get my hands on some reasonable looking xenomorph-type figures (or maybe a few zombies or mutants) for them to go up against. 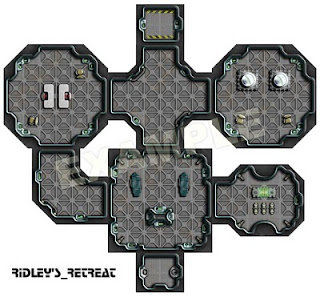