The Age Of Shadow - New Releases! 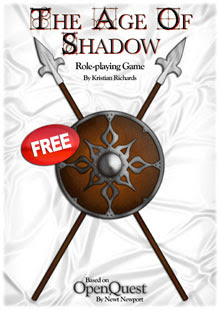 The main rule book has had a very minor update (so there's no need to print it out again if you've already done so), with only things like the names of example characters, the map in the back of the book, and a few grammatical errors, being altered/corrected.
RPGNow LINK - - - DriveThruRPG LINK
* * *
The Age Of Shadow: Campaign Guide - $2.99 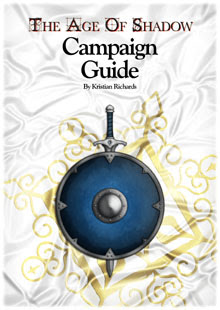 A short campaign guide is also available to go along with the main rule book (for $2.99 ...which is a little under £2 in GBP), which is intended to be an easily digestible primer than can be read in a single sitting (rather than a fully fledged campaign setting that might be hard getting some players to read).
The book itself includes a brief history of the land and its people, a description of all the major settlements and fortifications, a colour map of the land itself, new items and special materials, additional/variant rules, and a statistics for several different NPC types.
RPGNow LINK - - - DriveThruRPG LINK
* * *
Website Update
In addition to the above, the Age of Shadow website has also had a bit of an update - mainly to include the new links to both of the new books, but also to include a couple of new articles that might be of interest.
Website LINK
* * *
Oh... and of course the latest Map-a-Monday dungeon is posted below :)