Here's a quick look at the progress on the next zone10 building: 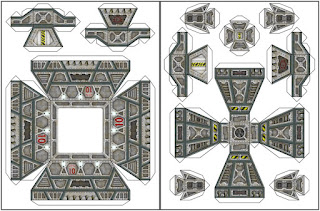 So that's the first building pretty much done now (apart from a few minor tweaks and getting the assembly instructions sorted out).

But I was wondering if folks would prefer it if I were to release additional structures like this on their own (for something like $1), or if you'd rather have several new buildings released together in one new set?

My original plan was to release 3 or 4 new buildings as an expansion set (for something like $3) ...but now I'm leaning more towards releasing them individually.

The upside of releasing them on their own is that folks can just pick up the particular structures that they like, and also that fact that they'll be able to get their hands on them sooner (i.e. I could release a building as soon as it is completed - rather than having to wait for several new buildings to be finished, and then released all together as a new expansion set).

Anyone (who is interested in these 10mm terrain pieces) have a preference?