Experimenting with the Roll 20 virtual tabletop


After hearing good things about the (browser based) Roll20 virtual tabletop, I thought I would have a little play around with it today - and I have to admit that it seems rather nice.

However, it did take a while for me to figure out how to get the inbuilt grid to align with the grid of an existing image (as you basically have to work with a grid size of 70 pixels - or fractions thereof) - but once I'd figured it out, it wasn't that much of an issue.

You can also search for maps and tokens within Roll20 itself (which is pretty darn cool if you need something on the fly), as well as being able to upload a few images of your own (I think you're given 100MB of storage space with a free account). However, I'm pretty sure that you can't add maps or tokens from a specific URL (which was a bit of a letdown - especially since I've got loads in my photobucket account) - but I understand that you get more storage space with either of the subscription options. 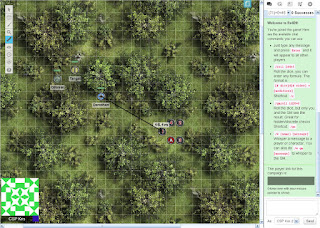 A quick example using one of my wilderness maps and a couple of basic tokens.


I also had a few problems when trying to set up and use a basic character sheet (as it kept rolling a skill test multiple times for some reason), and since I'm only testing it out with a free account I sometimes have to wait for a 15 second counter to run down before it will load (which isn't really much of an issue) - but other than that it's not too bad at all.

I particularly like how the GM can switch between several different map windows without it having any effect on the map that the players are viewing (as the latter is toggled separately with its own little 'bookmark' icon). I also like how easy it is to add and modify little extras to each character/monster token - like a HP track that only the GM can see, different coloured markers to indicate various effects, and so on. And if I ever wanted to add a bit of ambient music or the occasional sound effect, then the jukebox feature might come in handy too.

But for me, the most useful features have to be the 'fog of war' (for masking off areas of the map that the players are yet to explore), and the little ruler tool that not only allows you measure the distance from one square to another (thus eliminating the need to count squares for ranges, movement, etc.), but also acts a great tool for determining line of sight.

Obviously there are some features that I haven't tinkered with yet (or I'm yet to discover), but on the whole it seems like a handy little tool ...and one that I'd gladly use if I was running an online game.

Email ThisBlogThis!Share to TwitterShare to FacebookShare to Pinterest
Labels: VTTs