I had planned on getting some serious work done on this during the past couple of weeks... 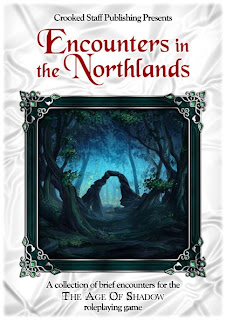 ...however, thanks to a nasty cold/flu-like bug, I've barely managed to do anything.

Anyway, now that I'm starting to feel a little better, I'm back to work on it - though I have to admit that converting my simple (sometimes cryptic) game notes into fully fledged encounter/adventure scenarios is far more work that I'd like to admit :)

That being said, the first draft of the three main encounter/adventure areas are almost complete, and work on a possible forth one has begun.

I'm also thinking of including a slightly reworked version of Mathgar Ruins in the booklet (with better maps etc.) ...as an added bonus - though I'm not sure if this might be mistaken as an underhanded way of increasing the product's page count with content that's already available for free (even though it's inclusion would have absolutely no impact on the cost of the product whatsoever) ...so the jury is still out on that one.

And that's about it for now, though I will add that I'd be intrigued to know if anyone would be interested in doing some additional play-testing of these encounters (with their own gaming group - using the Age of Shadow RPG) ...and if so would a free pdf copy of the final product (along with a play-testers credit - if desired) be adequate compensation for your time?