OK, now that we've got the background and grid drawn, lets start adding a few rooms and passages (note that we're not changing the colour of the grid right now as we won't be able to see it if we if we do - so we'll do that later).

However, first will need to change the grid-size within Inkscape (i.e. the dots that our lines snap to - not the grid we have drawn), as not all of the shapes we draw will be perfect 5ft squares. To do this we'll once again select File > Document Properties and click on the 'Grid' tab. Now, we'll change the values to those listed below: 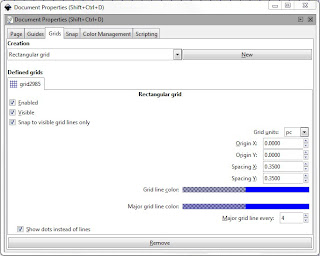 Note that all we are doing here is dividing each of our grid squares by four (with regard to the guide 'dots' that our lines will 'snap' to), while at the same time retaining a darker reference 'dot' at the corner of each square (as shown below):

Next, we want to create a couple of basic rooms and passages in our dungeon - so in much the same fashion as we drew the background rectangle, we'll use either the 'Create rectangles & squares' tool (which I've identified with the letter E on the tools diagram below), or the 'Create circles, ellipses, and arcs' tool (G).

(note that you can also use tool K for more extravagant shapes if you wish, as shown at the beginning of part one).

As before, we'll hover the mouse over one of the grid points (i.e. where we want our shape to begin), and hold down the mouse button while we drag the shape to another grid point - thus defining our shape. 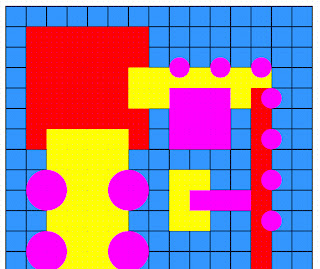 Note in the above picture I've used different colours to better show the different shapes that I've used. When drawing these yourself, you'll probably be drawing them in white (making sure that they have no stroke/outline), meaning that the resulting image should actually look something like the example below: 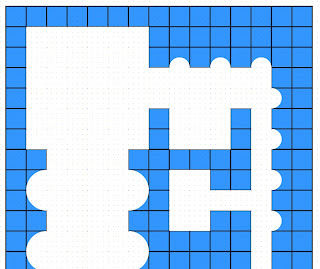 Once you're happy with the way it looks, you can click on the grid we drew earlier (with the select tool (A) ), and instead of sending this 'layer' to the back, we'll hit the 'Rase selection to top' button (which I've highlighted in red on the image below) to bring our grid to the foreground. 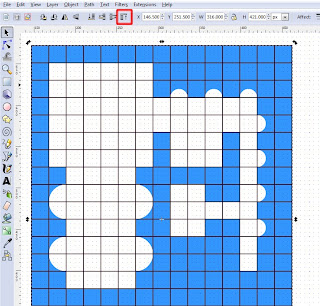 Then, while we've got the grid selected, we'll change its colour in much the same way as we did with the blue background (using the 'Fill and Stroke' menu) - except that this time we want the 'Fill' tab to have the 'no paint' option selected, the 'Stroke paint' tab to be given the same blue colour as the background, and the 'Stroke Style' tab to be given a line width of 1 px.

Now that that's done, we need to add a few little details here and there to help finish things off - so we'll go ahead and add a few more shapes here and there ...which can be used to represent additional walls or pillars - or to simply to give one of the rooms a slightly different shape. 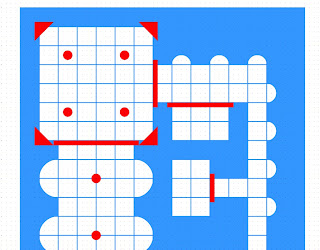 In the example above I've included several such shapes - though I've shown them in red to better identify them; whereas in the example below, I've changed their colour to blue to illustrate how it should actually look when you draw them yourself (using the correct colour). 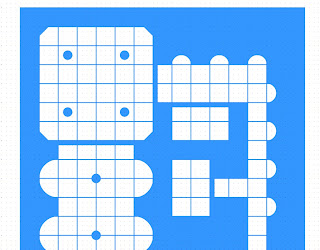 Now we'll take a little time to add a few final details (like doors) to complete the dungeon: 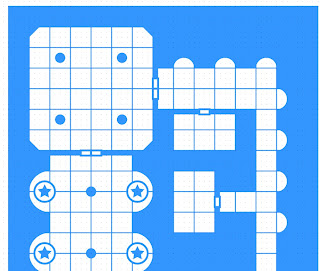 In the above example, the doors are simply white rectangles (2 x 1 'grid-dots' in size) with a blue 'stroke' of 2 px. Similarly, the large statue icons are just white circles (with a 2 px blue stroke), and a star shape (tool H) at their centre. Obviously, you can go to town and create as many different icons as you like - but for the purposes of this tutorial, these two examples should hopefully suffice.

And that's the dungeon pretty much finished!

All that's left to do now is to got to File > Export Bitmap (in the menu bar), change the dpi value to '300' and hit the export button (though there is a couple more additional steps to complete if you're planning on using these maps in something like Roll20 or any other VTT - but I'll discuss that in part 3).

And here's the finished dungeon: 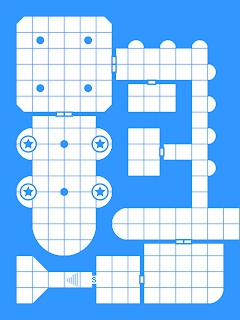 Email ThisBlogThis!Share to TwitterShare to FacebookShare to Pinterest
Labels: tutorials