A little earlier on in the week, Purple Duck Games released the latest instalment of their Purple Mountain mega-dungeon (for the Pathfinder system) - the maps for which were drawn by yours truly.

As is usual, CSP also provides an accompanying battle-map (or in some cases multiple battle-maps) for each level of the Purple Mountain ...and, as you've probably guessed, today sees the release of those that can be used in conjunction with level 5: 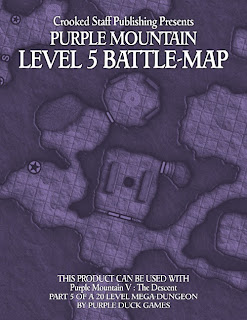 However, I think it's worth noting here that these 'battle-maps' are simply enlarged versions of those maps found within the adventure itself - blown up to miniatures scale (i.e. 1" per grid square), and spread out over several A4/letter size pages for ease of printing. 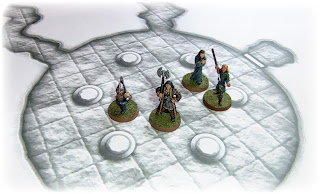 As such these maps are not intended to be comparable to high resolution dungeon tiles (which can consume a lot of ink and look best on glossy paper) - but are instead meant to offer good results when using cheap 'photocopier-style' paper and the low/ink-saving/economy mode of your printer.