Now I'll admit that I'm not much of a wargamer (even though it is something I'd like to get more involved in) - but every now and again I get the urge to paint up a small army of some description ...with the hope of putting them to use someday.

However, I'm not a fantastic painter or anything like that (as most of what I do are done to what I would consider a good tabletop standard), but I thought I'd start sharing a few images (here on the blog) of stuff I occasionally throw some paint at (or anything else hobby related) - for those folks that might be interested in such.

So, since I recently picked up the Bolt Action rule-book (a WWII skirmish game), and also because I have some interest in that particular conflict, I've been splashing some paint on a few miniatures from Black Tree Design's WWII German range ...and here's what I've got finished so far... 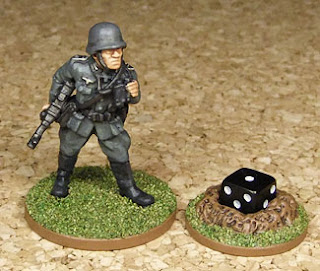 These mini's represent the compulsory units for any army (i.e. one HQ and two infantry squads), and as such, are what I've concentrated on getting finished first.

This particular configuration comes in at just under 200 points (as I've included MP40's for the NCOs and an MG34 team in each squad) - though I hope to get another 100 points done by the end of next week (which will mostly expand upon the size of the infantry squads).

In addition, the idea for the home-made pin markers came from HERE ...but mine are a little smaller, as I've used a UK penny as the base and a few tiny 7mm dice (though they might prove to be too small to be practical ...but we shall see).