You would be forgiven for thinking that I've given up on my resolution to try and paint at least one miniature every week throughout 2016, as I've not posted anything for a little while.

However, that couldn't be further from the truth - as I've actually been doing a bit of batch painting these past few weeks ...the result of which can be seen below.

(for those that may be interested, week 23 was getting them all assembled, week 24 was priming and basecoating, week 25 was washes and highlights, and week 26 was basing and varnishing) 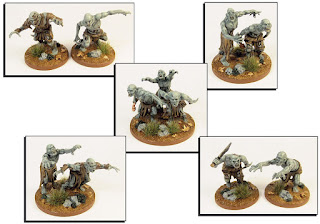 And, like the skeletons I painted earlier in the year, these are more plastic undead miniatures from Mantic Games (which, I hope you'll agree, are rather nice looking ...well, 'nice' might not be the right word, but you know what I mean :) ).

Anyway, to build this little horde of zombies I've used 3 sprues of their zombie miniatures, and added a bit of variety by mixing them with one additional sprue of ghouls (as both sets are pretty interchangeable).

I've also done a bit of multi-basing on some of them - so that these can represent tougher clusters of zombies - though they'll act as one monster in combat (so a base containing 2 zombies might get double the attacks, and twice as many HP, for example). 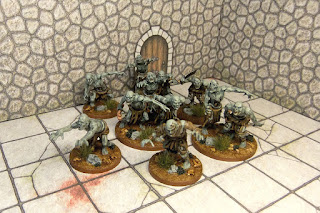