I almost forgot to post a picture of this week's mini ...but here it is (better late than never right?). 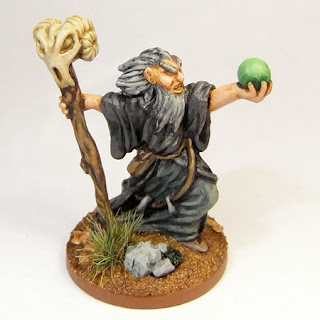 I believe that this miniature is long OOP and is from Grim Reaper Castsing's 'Nasteez' line, and despite it's pose being a bit two dimensional, I don't think it's too bad a miniature (and is definitely one of the better ones from the old 'Nasteez' range).

And if you've seen my recent post about making some of my own grass tufts, here's a pic of a little treasure token I've made ...with several of the home made tufts attached: 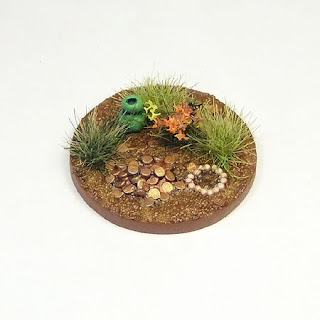 To make the treasure itself I've used a tiny bead on top of a slightly larger bead for the bottle, and a couple of craft 'microbeads' glued in a circle for the necklace. For the golden coins I've simply rolled a bit of excess greenstuff into a long line, and then (once it's hardened) cut it into thin slices.

Plus I've also been experimenting with some more scatter terrain (to add to my existing cave/underdark pieces*)... 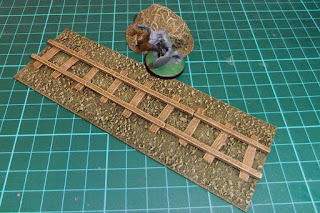 ...which has turned out well enough for me to be considering making a bunch more :)

*you can see my previous pieces HERE and HERE