As most of you will be aware, the aim of 2017's Patreon campaign was to create a bunch of full colour geomorphs that folks (including myself) could use to piece together dungeon maps of various shapes and sizes (largely for use in VTTs or similar).

Well, now that the year is coming to a close, I thought that it would be a good idea to run-through everything I've drawn thus far (though it's worth noting that I am hoping to continue the project throughout 2018 - but maybe with a few small changes).

To begin with, here's a quick look at all the basic geomorphs to date... 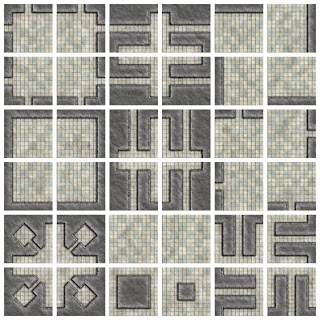 ...which can be pieced together to create much larger rooms (including oddly shaped ones).


And finally, there's almost a score of (what I'm calling) 'feature rooms'... 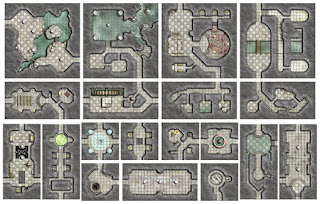 ...which are tiles that can be used to represent specific dungeon encounter areas (half of which have been based on the suggestions of my kind patrons).


And while the Patreon Campaign is far from being a great earner (as it's really more of a tips jar sort of thing) I would like to thank each and every one of my patrons (both past and present) for their support. You guys are great!

So, if you're running a game online, or would simply like a cool looking map for your own notes, you should be able to put together a nice (consistent) looking dungeon with the 2017 tile set ...as shown in the example below: 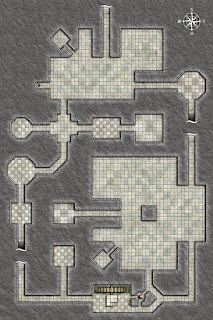 Note that all of this year's maps can be found in THIS ALBUM or on GOOGLE DRIVE.

Long time followers of the blog might know that, as well as drawing and writing various RPG stuff, I also like to build pieces of physical terrain for use in my games (usually from bits of junk and/or cheap supplies).

Well, next year I hope to take the tutorials I write for these projects one step further, and will be launching a youtube channel to accompany some of the stuff I do:


To begin with I'll be concentrating on my version of the 2.5D dungeon system (as originally created by DM Scotty) ...but I aim to cover a wide variety of terrain and gaming aids in the long run.

I do, however, still have a lot to learn about shooting and editing videos (and my current camera is not the best) - but I hope that some of you will follow me on this new journey.

And that's it for now. Here's hoping that you all have a good (and safe) holiday season ...and here's to a new year of new (and hopefully interesting) projects!