A quick tidy results in some new terrain.

I don't know if any of you have a similar problem, but I have the bad habit of keeping a lot of my offcuts (from the print & paste terrain) - just in case I might need them at a later date :S 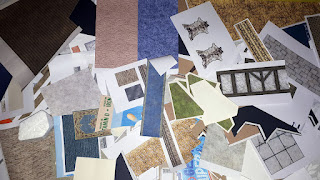 Well, I recently decided to have a bit of a clean out, as the amount of junk I was saving was getting silly. And, as you can see in the next picture, there was quite a lot to be thrown away (luckily most of this can go in the recycling bin). 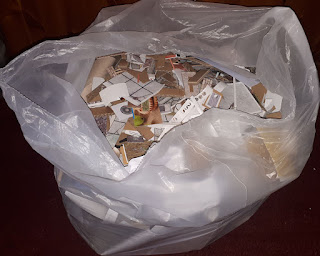 Anyway, I did decide to keep a few things (like a half page containing a 'wood' or a 'stone' texture - as they're always useful), and I also spent a bit of time assembling anything that had enough parts to make it complete ...like the chests, books, and crates that you can see below: 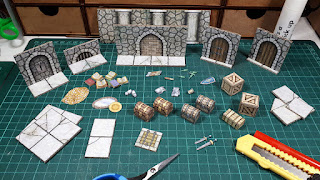 Now, the original plan was to simply throw most of this into a 'bits box' of sorts (for use in future projects/builds) - but as you can probably tell, I didn't stop there, and last weekend I spent a few hours chatting/streaming on Discord while creating a few bits of scatter terrain from some of this junk.
And here's the resulting pieces: 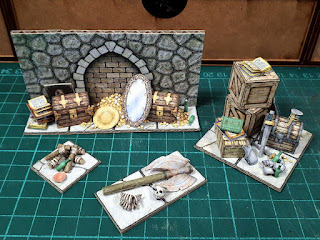 So, as you can see, there's a large treasure hoard, a pile of torches, a huge axe (for a giant or similar), and a bunch of 'supplies.'
And I have to say that it was fun putting it all together - so I guess hoarding all of this junk did kinda pay off in the end (though it's not something I'd recommend ;) ), as I now have a couple of new terrain pieces that don't actually look too bad.
Anyway, it continues to be a busy month - what with the 'build along' project in full swing, online games to prep, maps to be drawn, and 101 other ideas that I want to get started (not to mention getting sidetracked with little projects like this), so I'll leave you with a (crappy phone) picture of something else I've been working on... 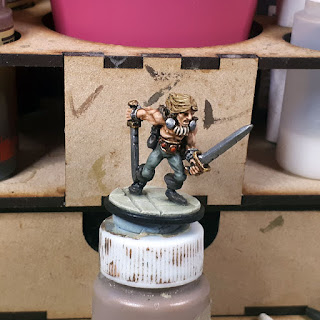 ...a really old GW model that I rediscovered. This poor fella had been sitting up in a dark attic without any paint splashed on him for many an long year - so I thought I would rectify that!
Better late than never right?