Hello all ...and happy new year!

With it being the start of a new year, I thought it would be a good time to start work on a little 'build-along' video series ...one that's aimed at getting folks (back?) to the crafting table (i.e. new year's resolutions and all that).

So, if you've been tempted to give the 2.5D dungeon a try - but have never got around to it - then this might be the gentle nudge that you need* ;)

(*because, let's be honest, I've got quite a few videos out now - which is a bit of a double-edged sword - because if you're just discovering the youtube channel for the first time, the sheer number of episodes might be a little bit off-putting/overwhelming).

Anyway, the plan is to release 5 or 6 short videos (around one video a week throughout January) ...thus creating a little stand alone mini-series - one where I build (and encourage folks to build along with me) a dungeon from scratch.

So, in the first part (above) I'll just discuss the tools and materials that you'll need to get started ...then in part two I'll make the first couple of tiles ...and so on.

With any luck some of you guys who've been following the channel for a while might also like to build the dungeon along with me ...as I think it will be a fun little community project.

That being said - this is going to be a rather simple dungeon ...and it will all be built just using the four pages (one printout of each) featured in this (FREE) download... 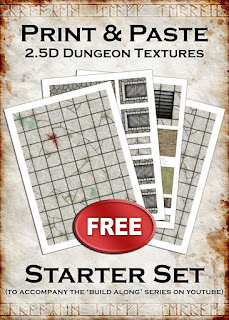 ...and, like I say, whether you're completely new to this kind of thing, or if you're a long time crafter, then I'm hoping that it will be a fun little project to get the year started!