I'm still hard at work on this, and I'm still aiming for a December release (hopefully early December) - but in the meantime I thought I'd post a quick picture of the overall layout of the fortress as it currently stands: 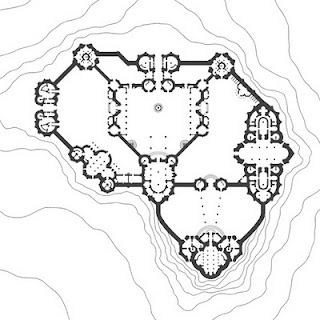 When finished, the booklet will contain around forty maps (examples of which are shown in THIS post), and a couple of extra pages that'll give a brief history of the fortress itself (for use with the AoS setting) - though this is going to be system neutral 'fluff' (for want of a better word) that can be used or ignored as folks see fit.
So I'm hoping that the book will prove useful to folks who are just interested in getting their hands on a bunch of fortress maps, as well as those interested in the AoS campaign setting.
Anyway, that's it for this little update ...now back to work!