I had been hoping to release my latest map-pack today, but since its only about half finished, it probably won't see the light of day until the beginning of next month (fingers crossed). However it is a rather ambitious project (and one I've been wanting to do for quite some time), and features multi-level maps of all the major building/towers within a large fantasy castle/fortress.
The fortress itself is that of East Eyrie (from the Age Of Shadow setting), but it can of course be used to represent any major fortification in most fantasy settings ...and if you are interested to see my progress thus far, here's a quick look at the pages that are pretty much finished: 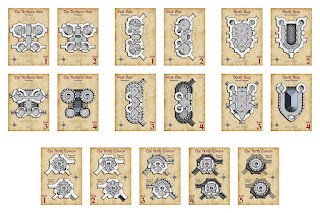 As I say, I think I'll be releasing this as just a map-pack to begin with ...with the possibility of a companion booklet to go along with it in the future (that looks at East Eyrie in a little more detail).
* * * * *
I'd also like to thank everyone that took advantage in the Halloween sale - and I hope you all enjoy using the Colony 19 tiles (or at least find a good use for them).
* * * * *
And finally, today sees the release of Purple Mountain I: Temple of the Locust Lord ...the first part of a (Pathfinder compatible) mega-dungeon by Purple Duck Games - and the reason that I'm particularly exited about this project is because I have been asked to provide all of the dungeon maps for the series. 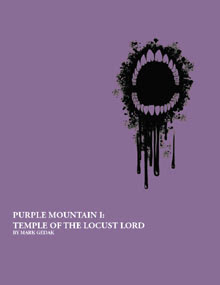 And to accompany this 20 part mega-dungeon CSP will also be offering all of these layouts as separate battlemat scale maps so that the entire dungeon can be represented at a scale of 1 square = 1 inch. 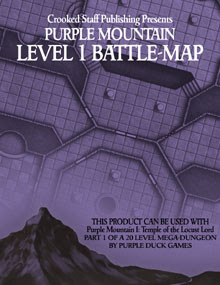 So if that sounds like something you might be interested in, you can get the first level of the pathfinder adventure from Purple Duck Games' DriveThruRPG and RPGNow storefronts, and the Battle-Map version of the dungeon can be found HERE (via RPGNow) or HERE (via DriveThruRPG).