I'm finally getting back to work on the Age of Shadow setting, and to start things off I'm expanding the detail version of the world map (or at least that part of the map that covers most of the North Kingdom), and adding various settlements and areas of interest from my notes.

So, since it's been a while since the last Age of Shadow update, I thought I post an early WIP pic of how it's looking thus far: 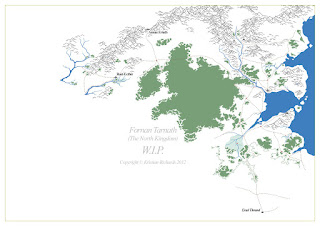 Note that the large world map can be found HERE, and the existing detail map (as found in the back of the main rule book) can be seen HERE