A few years back I was part of a little project called the DM sketchpad - which was basically a free d20 'zine that was run by Mark Gedak (of Purple Duck Games) via the Grand OGL Wiki website.

Anyway, I've only recently discovered that Mark has re-launched the DM sketchpad as a shiny new G+ Community (and if you're not familiar with google+ communities - they're somewhat similar to forums/message boards) ...which can be found HERE. 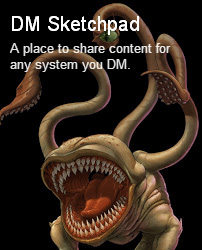 But how is that relevant to my own 'Dungeon Monthly' project?

Well, my part in the original DM Sketchpad was (not surprisingly) to provide a new map (dungeon or otherwise) for each monthly issue - which, when you come to think of it, is exactly what I'm doing now with the new 'Dungeon Monthly' feature of this blog :)

So, Mark has invited me to share these maps with the DM Sketchpad community over on G+ ...however the idea this time is to see if people would be interested in adding their own ideas for room descriptions/encounters/etc. for each area of the map (be it system neutral or with full stats for their game of choice) - thus creating a nice little mini-adventure (or two) every single month.

Folks could take on just one room (perhaps working to a general theme - in order to keep things somewhat consistent), or stat out the entire dungeon, or even expand on the map with a few of my existing geomorphs (though my favourite idea is to assume that each of these maps is an area within a larger dungeon complex, and thus the dungeon would expand each month with the inclusion of a new map and, if folks are willing, a few encounters to go along with it).

Anyway, that's the idea. So if it sounds like something that you might be interested in getting involved with (even if it's only to offer a bit of feedback or to suggest what kind of area gets mapped out next) then feel free to head on over to the new DM Sketchpad and join in on what should hopefully be a fun little project :)